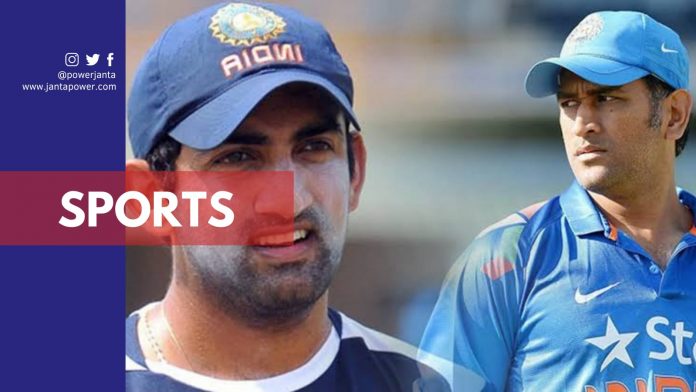 Right after the BCCI announced the name of the Indian squad members for the upcoming ICC Men’s T20 World Cup 202, another announcement made the headlines right away. The return of MS Dhoni as the mentor of the Men in Blue during the showpiece event. Often referred as the Captain Cool, Dhoni is regarded as one of the smartest leaders in Cricket. As he becomes the mentor for team India, fans are going wild with expectations. In fact, former Indian opener Gautam Gambhir also had something to say.

Gautam Gambhir has opened up about Dhoni taking charge as a mentor. Also, he has explained why BCCI decided to choose Captain Cool in that role. “A good story to have, but I’m sure his (MS Dhoni) role will be defined. because you’ve got the head coach, the assistant coach, and the bowling coach. So, I’m sure there has to be something from Virat Kohli or Ravi Shastri on what they would want apart from what they already have because India has been very successful in T20 Cricket,” Gambhir said on Star Sports’ show Follow The Blues.

Dhoni is best known for his unbelievable performance under pressure and according to Gambhir, it could be one of the main reasons why Virat Kohli and Co. would be benefitted from him being the mentor. Gambhir explains that Dhoni being the back support for India would actually be most useful during the knockout matches in the T20 World Cup.

“It’s not like India has struggled in T20 Cricket. Had India struggled in T20 cricket, they might have had to get someone from outside, but Dhoni’s experience and his mindset of handling pressure in those crunched games could be one reason why they’ve got him as a mentor – not purely from the skill point of view, because these guys have got all the skill, to go out there and deliver, the former Indian opener added.

India’s ICC trophy draught is still ongoing and Kohli is yet to win his first. This is the biggest criticism of Kohli’s career as a skipper. However, this T20 World Cup might be the stage where everything comes to a conclusion. Gambhir further explained how India has struggled most during the knockout stages and that’s where it needs Dhoni’s guidance the most.

The veteran also believes that Dhoni’s involvement will be huge for the youngsters. Dhoni has always been great with the newcomers afterall. “And you have to remember that most of these guys are young, for example, your Rahul Chahar and Varun Chakravarthy or any of these batters play – they’ve not been to any of the World Cups. So, I’m sure MS will share his experience.

However, Gambhir has also clarified that the Indian coaching faculty is already world-class. In fact, he believes that MS Dhoni would have nothing else to offer other than his experience. “That probably is the only thing I can think of; apart from that, I don’t see MS Dhoni changing anything from a skill point of view. Ravi Shastri’s been there, Vikram Rathour has been there, and the entire support staff is there. So, probably MS can only add his experience to the players while probably going into the crunch games,” Gambhir added.

It seems like Gautam Gambhir has his point of view pretty straight. However, everything will be clear once India starts its T20 World Cup campaign on 24th October.