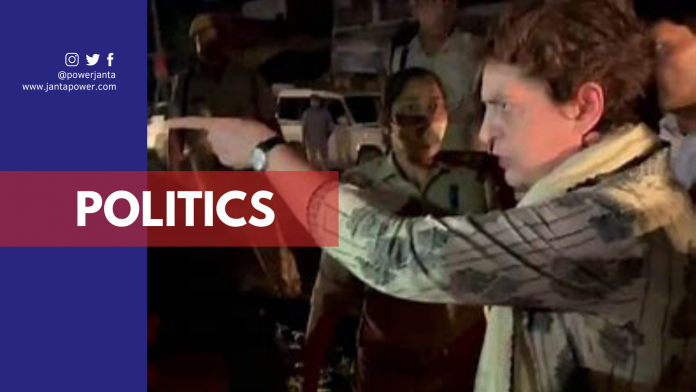 Meanwhile, Gandhi and other leaders of the party had taken an alternative route to reach the bordering area of Hargaon, because of the heavy security on the main road due to the violence.

Gandhi said, “this incident shows that bad politics of BJP government to bow down to the farmers. This is the nation of farmers, not BJP’s. Further, she said that the government has committed the crime we are not. We are just trying to meet the relatives of dead farmers. Why are you stopping us? You should have a warrant.

After Priyanka’s detention, her brother Rahul Gandhi tweeted that BJP feared from your courage. I know you will not back down. In this non-violent fight for justice, we will make the farmers of this country win.

The incident of Lakhimpur Kheri

Farmers claimed that people were protesting against the Centre’s farm laws, meanwhile, a car deliberately collided with crowed. Farmers also alleged Keshav Mishra the son of Union Minister of State for Home Ajay Mishra as the driver of SUV cars that collide with farmers crowed.

Responding to this the Samyukt Kishan Morcha announced a protest in front of the District Magistrate and Divisional Commissioner office across the country. They also demand an investigation by the citing judge of Apex court and not to the Uttar Pradesh administration.

Nonetheless, this is a black day for the UP government which has been unable to handle the situation properly. Whereas Chief Minister Yogi Adityanath appealed for maintaining peace in the area.

Despite Priyanka Gandhi and Akhilesh’s detention, many other political leaders such as Chhattisgarh’s Chief Minister Bhupesh Baghel and Punjab Deputy Chief Minister Sukhjinder Singh Randhawa were barricaded from reaching, with police citing section 144 being in place in Lakhimpur Kheri.

Baghel alleged the UP government for wrongly handled the situations and also for Priyanka Gandhi was manhandled last night. Further, he said, “section 144 was put in Lakhimpur then why police were being stopped them from entering Lucknow”.

In meantime, Congress Union Minister Salman Khursheed was trying to reach Priyanka and provide her legal action. According to the source, Khursheed was also put under house arrest in Lucknow.

ALSO READ: What Mamata’s Meeting With Sonia And Rahul Means?