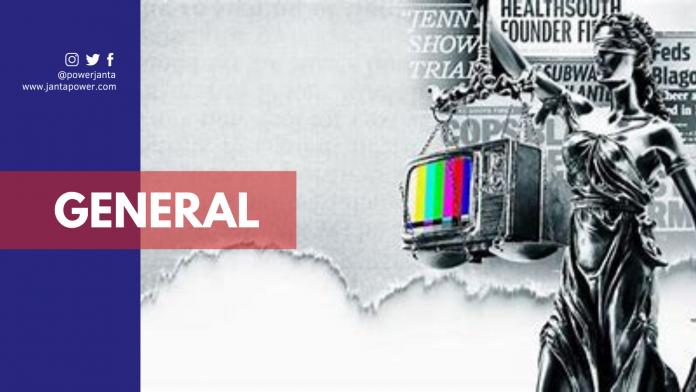 Media trial cases in India is not new. From Sunanda Pushkar’s case to Sushant Singh Rajput’s death and now the arrest of Aryan Khan had made us witness several instances of media trials. Media whose primary work is to inform, aware, educate and entertain the masses has now become a Janta Adalat or Public Court. It has started interfering with the court’s proceedings. The media fully ignores the crucial gap between the convict and the accused.

Excessive media coverage of the accused or suspect before a court trial either discredits a fair trial or characterizes the accused or suspect as the one who has unquestionably committed the crime. However, there have been times where the media has played a positive role in arousing society’s collective conscience and ensuring people who have been denied justice, get it. For example cases like Jessica Lal, Delhi gang rape and Priyadarshini Mattoo supports this notion. But, it doesn’t mean that media can invade a persons’ privacy or even interfere with the work of investigative agencies?

Let’s take a look at some of the well-publicized media trial cases where media misidentified their target and the people they found guilty in their trials were exonerated by the court.

The case of Uma Khurana

In 2007, India Live TV broadcasted a sting operation alleging that Uma Khurana, a Delhi schoolteacher, was leading a student sex racket. An enraged mob stormed the classroom and assaulted the teacher by ripping her clothes. The sting was later proven to be false, and the court agreed too. Despite filing a defamation lawsuit, Uma Khurana abandoned the case after reaching an out-of-court deal with the channel.

The case of Jasleen Kaur and Sarabjeet Singh

In August 2015, Jasleen Kaur, a Delhi student, accused Sarabjeet Singh of sexually abusing her. Posting a photo of Sarabjeet on Facebook she wrote about how he reportedly harassed her. The incident became a rallying point for women’s safety. Delhi Chief Minister Arvind Kejriwal even praised the young girl’s “bravery.” After that, many news outlets followed Sarabjeet, publicly humiliated him for days despite his denial of the charges lodged against him. He was also apprehended by the Delhi police. After being in jail for four years, he was cleared of all charges by a Delhi court in October 2019. While Jasleen relocated to Canada after the incident to pursue her job, Sarabjeet had to face numerous challenges that had harmed both his personal and professional lives.

DK Ravi, a Karnataka IAS officer, was discovered dead at his Bengaluru home in 2015. Ravi was reputed as an honest officer, and hence rumors started that his murder was caused by pressure from corrupt politicians. As the issue gained national attention and campaigns demanding justice for DK Ravi were launched. Accusations were made against KJ George, the then-Home Minister, alleging his involvement in the death and a cover-up. The media accused several members of the then-Congress government of harassing the officer and also accused the then police commissioner of being a part of the cover-up.
However, the CBI stated in 2016 that the IAS officer committed suicide for personal reasons and was in love with a married officer. Later, in 2017 KJ George filed a criminal defamation case against Arnab Goswami and Times Now.

Kafeel Khan who worked as the nodal officer in charge of the encephalitis ward until August 13, 2017, was detained in September 2017 after 60 children died in the government-run BRD Medical College hospital in Gorakhpur. The allegations of criminal breach of trust by a public official, criminal conspiracy, fraud, and other things were leveled against him. Later, in September 2019, Khan was found not guilty of all charges brought against him.

However, Khan’s ordeal did not finish there. On December 13, 2019, UP police detained him again in Mumbai for a speech he gave during an anti-CAA protest at Aligarh Muslim University. He was charged under the National Security Act and according to the UP police, his speech “sowed the seeds of discord and disharmony.” But later on September 1, 2020, he again was proved not guilty and was released from the Mathura Jail nearly after seven months.

Kafeel Khan has been branded as a villain, ‘anti-national’ by several media outlets for over three years. This severely affected his work, life, and also his family.

A double homicide in Noida garnered national headlines in 2008. In May 2008, Arushi and her domestic helper, Hemraj were murdered. There was dramatic media coverage and trial, with scandalous claims leveled against Aarushi and other accused. In November 2013, the parents were found guilty of the murder and sentenced to life imprisonment. However, many critics claimed that the evidence was insufficient to fully blame the parents for the murder. They said that the media intervention caused doubts in the public’s minds. The Talwars appealed the ruling to the Allahabad High Court, which acquitted them in 2017 after giving them the benefit of the doubt and deeming the evidence insufficient. But for a decade the parents were labeled as murderers by the media. Also, the case was sensationalized by many outlandish speculations, and shameless character assassination was passed off as news.

The media should strive to be a facilitator of justice or a voice for the underdog, instead of conducting a trial with great sensationalism. While presenting any crime news, the media should keep in mind the core principles of presumption of innocence until proven guilty and guilt beyond a reasonable doubt.

ALSO READ: How Media Restrictions Are Weakening The Democracy?