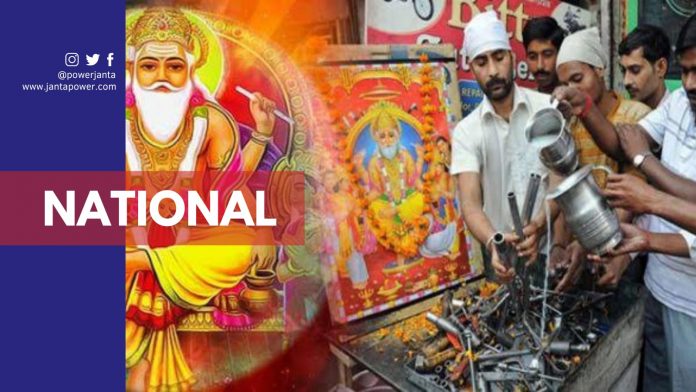 According to Yajurveda in Hindu tradition, there are more than thirty-three crore gods and goddess. We have God for literally everything. The God of creation, Brahma, Vishnu as preserver, Shiva the destructor, for thunder there is Indra, Laxmi is for money, and for knowledge there is Saraswathi. Just like these Gods, it’s only natural that we have a God for architects, craftsmen – whom we can call an engineer. He is lord Vishwakarma.

A Devine craftsman Lord Vishwakarma who has the credit to designed Krishna’s Dwarka and ten-headed Ravna’s Lanka. He has also engineered and created weapons like Trishul of Shiva, Sudarshana Chakra of Vishnu, Indra’s Vajra, and Ravna’s Pushpak vimana. Hindu celebrate Vishwakarma Jayanti on 17 and 18 September of every year. According to the Hindi calendar, it falls on the last date of Bhado or Bhadra month.

Who is Vishwakarma and why do we celebrate his day?

Lord Vishwakarma is the son of Lord Brahma, with a heavy beard and crown on his head and lots of jewelry on his body. He is a God with four hands, who rides on a goose. He holds a measuring tape, a book, a scale, and a pot in each hand. According to Hindu mythology, he is the principal architect of the universe. He is a God with multi-dimensional vision and presides over the sixty-four mechanical arts. He architect, engineered, and create weapons, cities, and chariots for God and Goddess.

He is the God of creation and engineering therefore every professional or unprofessional related to these fields celebrates his day. Engineer, craftsman, architect, laborers, owners of factories/vehicles or we can say everyone who is related to these fields, directly and indirectly, worship their tools to mark this day and remain true to their work.

In respect of Lord Vishwakarma, everyone gives rest to their working tools on this day and the Lord gives them his blessings. Even the owners of big factories and industries shut their machinery and give rest to their workers. After then they all gather at a place and worshiped lord Vishwakarma to remove negative energy from their life and workplace and to be true in their work.

Vishwakarma puja is celebrated mainly in the state of Assam, Bihar, Uttar Pradesh, West Bengal, Karnataka, Odisha, Tripura, and also in Nepal. This year Vishwakarma Puja will be celebrated on September 17 and the time of Sankranti is 1:29 AM.

Bursting and Sales of Firecrackers Banned till Jan 2022

Why India Needs A Legal Framework for Wrongful Imprisonment Compensation?