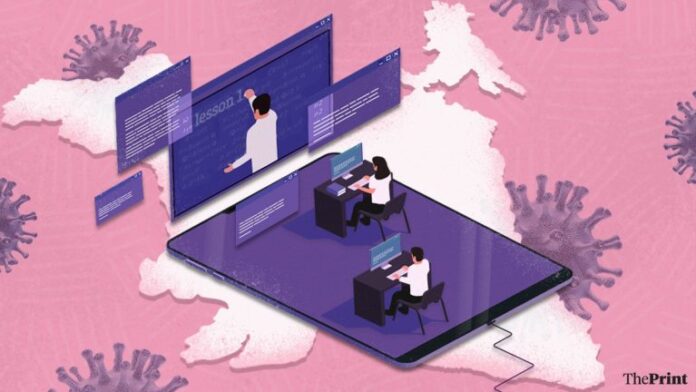 New Delhi: From platforms offering online lessons, NEET/JEE coaching and coding classes, to those allowing mid-career opportunities to bolster one’s educational qualifications, edtech has taken off in a big way in India, with Covid-19 providing a big push to start-ups in the sector.

Several start-ups involved in edtech since before the pandemic claim to have grown in light of the ensuing lockdown, which led schools and colleges to be shut down and precipitated a job crisis spanning many sectors. The newer apps, meanwhile, entered the market as the pandemic took root and managed to register thousands of users within months.

According to a report released this June by the Bengaluru-based management consultancy firm RedSeer and Omidyar Network India, a Mumbai-based equity investment company, edtech users — both at the school and higher education levels — doubled to 9 crore from 4.5 crore between 2019 and 2020.

The report estimates that the edtech sector in India will be worth $3.5 billion by 2022. Individual players in the Indian edtech sector offer a similar assessment, saying the popularity of the apps is likely to continue in the future, even when colleges and schools resume normal classes.

Also Read: Why online classes may not be such a good idea after all, especially for kids

In a press statement released in June, BYJU’s, which caters to tutoring across different levels, quoted an April 2020 report by market intelligence firm Sensor Tower to claim it was one of the 10 most downloaded education apps in the world during the lockdown.

According to the statement, over 60 lakh new students joined the platform in March, when schools and colleges across India were shut down, and 75 lakh in April

Facebook to use uploaded videos for improvement of its AI algorithms