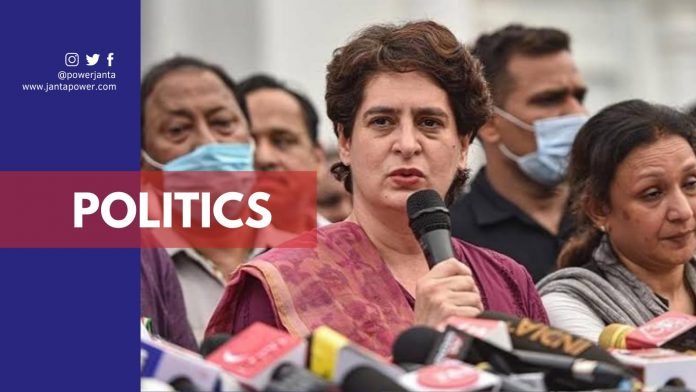 Priyanka Gandhi Vadra has been the center of attention in Uttar Pradesh for the past four days, after being detained in Sitapur, sweeping the floor at the guest house there, then arriving in Lakhimpur with Rahul Gandhi and sweeping the floor in a Valmiki locality. She is also going to hold a mega rally on Sunday in PM Narendra Modi’s constituency Varanasi.

Some take this as a sign of the Congress resurgence in Uttar Pradesh, but the BJP appears to be unconcerned with Priyanka’s increased political clout in the state. In reality, it appears that the BJP is attempting to make Priyanka look like a factor that will benefit them in the upcoming election. However, the state’s primary political opponents, Samajwadi Party, and BSP described Priyanka and the Congress as “non-factors” with no support base in the state.

On Friday, Uttar Pradesh CM Yogi Adityanath in an interview made a remark about Priyanka sweeping the floor in Sitapur. He said that the “public has reduced her to that.” This spurred Congress to begin a state-wide campaign charging that the CM has degraded Dalits and women. However, the SP and the BSP w+ho were left out of the Lakhimpur episode, accused that there is a “fixed deal” between BJP and Congress. They claimed this by citing how Priyanka was permitted to travel to Sitapur on Monday while Akhilesh was not even allowed to leave his home that day.

In earlier elections of 2014, 2017, and 2019 in UP, everyone noticed that upper castes and Muslims did vote for the Congress in some numbers, but that was not enough to help them to make an impact in the state. Hence, the current political space being given to the Congress appears to be an attempt of BJP to ensure that its own upper caste voters in UP who are dissatisfied with them for several reasons end up voting for the Congress rather than the SP or BSP who are their main rivals in the state. The same may be said about preventing Muslim votes from becoming consolidated.

While Congress can help in splitting the opposition votes in the upcoming UP election and provide benefit to the BJP, there are chances that it can end up eating BJP votes too. It all depends on the impact of Priyanka Gandhi Vadra and how she handles everything before the UP Polls 2022. Hence, we have to wait to see whether Congress works as an X- factor to BJP and benefits them or it leads to their damage.

ALSO, READ: The Deciding Factor Of The UP Elections 2022: Caste-Based Politics