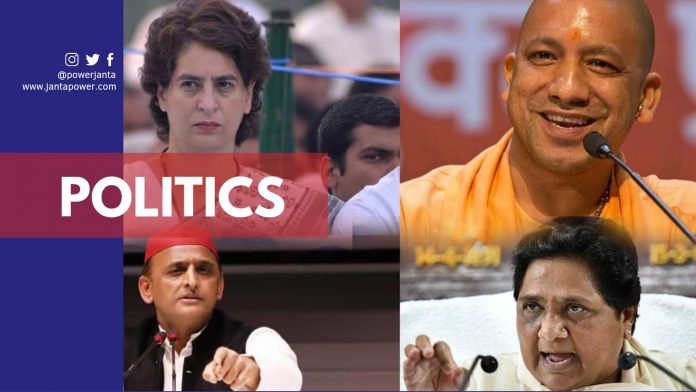 Elections and politics are some of the most widely discussed topics in India that unite everyone. From small to big, from an illiterate person to a literate one – everyone participates in the elections as voters. The UP Assembly Elections 2022 is upon us. Out of all the elections in the Indian states, elections in UP are always considered to be one of the most awaited ones. Not only because of the colossal demography of the state but also due to its divergent ethnicity and culture.

Henceforth, a wide range of public notions is what makes the elections here more fun to analyze and experience. UP Assembly elections of the year 2022 will have a fresh set of challenges than ever before like that of, a full-fledged pandemic and growing antagonism within the ruling party.

It would be foolish to predict possible outcomes for the upcoming elections. However, there are two ways to examine the state of political play in UP at this moment, as the parties begin strategizing, carving out political and social coalitions, and investing in their messaging to gear up for the polls.

The first measure to assess the importance of elections in UP is by examining the developmental parameters of the state. In chief minister Yogi Adityanath’s reign, UP has witnessed vital changes in its basic necessities both positively and negatively.

Education has seen revolutionary changes in the state, the Yogi government has significantly launched various programs and operations to boost the education infrastructure of the country. Starting with Operation Kayakalp that aimed at providing 23 basic facilities of schooling to approximately 1.5 lakh schools of UP.

The government has set a time-bound target to complete it. Seven of these basic facilities were provided in every school by the first half of 2020, including toilets, water facility, electricity, boundary wall, gate, and additional classrooms; and 100 percent of these facilities will be made available in all schools by March 2022, if things go as planned.

Uttar Pradesh has always been one of the poorly performing states in the ASER education survey, which measures the learning levels of children in language and maths. Henceforth to solve this problem Mission Prerna was brought into motion, to ensure measurable learning outcomes for children. Any government speaking the language of ‘learning outcomes’ is music to the ears of educational policy experts. This mission is set to disseminate throughout the state from block to district and then to the ‘Pradesh’ level.

Unemployment too has seen a dip but still, opportunities for employment are not made available for all. New methods of employment generation must be induced that are effective for all, the only field where employment is generated widely in UP is the MSME (Ministry of Micro, Small and Medium Enterprises) sector. The incoming and outgoing migrant workers from India’s urban centers also added a burden to economic distress.

However, the sector which has seen the least development even after being in the middle of the pandemic is the healthcare industry.

Anecdotal reports and independent assessments suggest that the health system in the state collapsed during the wave, widespread testing was not conducted and basic medical support in terms of oxygen support and drugs did not reach, especially in rural areas. The hospitals refused to admit patients, most hospitals in UP with basic level 1 facilities also failed to provide sufficient oxygen.

The number of deceased were also kept hidden as the reports did not capture the scale of either the cases or the deaths symbolized by bodies floating on the Ganga. The vaccination process in Uttar Pradesh has increased widely and awareness about this procedure is circulated in rural areas more than before.

After all this, the second measure to assess the importance of UP Assembly elections in 2022 is by examining how important elections are for the parties themselves. There are four main parties that are in the race to contest elections namely SP (Samajwadi Party), BSP (Bahujan samaj party), Congress, and the leading one being BJP( Bharatiya Janata Party).

Although BJP has more weight in winning elections again, it will be fun to see what the opposition has to offer. BJP has done both the right and wrong things for the state like largely promoting the Hindutva model on one hand and enabling Atma Nirbhar policies on the other. The UP Assembly elections are important for BJP as it will help them to, first of all, maintain their winning streak. Secondly, it will help them resolve their in-house antagonism and unanimously decide who the CM will be from the party this time, will it be Yogi Adityanath or someone else.

It will be challenging for SP under Akhilesh Yadav to see if they can get back in action with their work promises and muster the support of people other than the Muslim community. Similarly, BSP under Mayawati whose vote share is on a constant shrink needs to either create a coalition with a party of understanding like BJP or improve their party leadership tactics. Elections for both these parties are important because it will help them to replenish their relevance in the state legislature and would also help them to look strong as individual leaders, however, both the parties need to broaden their horizons and seek the support of people of other castes and communities.

Congress on a different front aims to implement a rainbow strategy to achieve the aid of people of all castes and religions. However, they usually fail to do so because of two reasons. First, due to their lack of policy implementation skills. The second, due to no star campaigner face for the post of CM. It’s still uncertain for them to either make Rahul Gandhi or Priyanka Gandhi Vadra the face of the CM. Hence, UP ELECTIONS OF 2022 Is necessary for them to know where they stand in Indian politics now in this A decade and if they can gather public support the same way they used to with their logical and scientific approach towards conditions of the state.

As it’s said elections are like a game of chess where parties are merely pawns but the main players of the electoral system are the people themselves and UP Assembly elections in UP for the upcoming year are of paramount importance due to multiple reasons like if the upcoming parties other than the one they choose will help to resolve problems of unemployment and illiteracy keeping in mind that all these parties have had a history of ruling in Uttar-Pradesh for even once.

Another question will also be if a party other than or BJP itself can improve pandemic conditions and tackle virus infection waves more vigorously or not. Lastly, for the poor and rural people, the question of whether new policies will help them earn a basic livelihood and enable sustenance is also of a great deal. As Atal Bihari Bajpayee has said, various parties will come and go. What should actually always live on forever is the Indian state and its people should always be remembered by one and all.

ALSO READ: Here Is Some Good News For The Smart Glass Lovers!