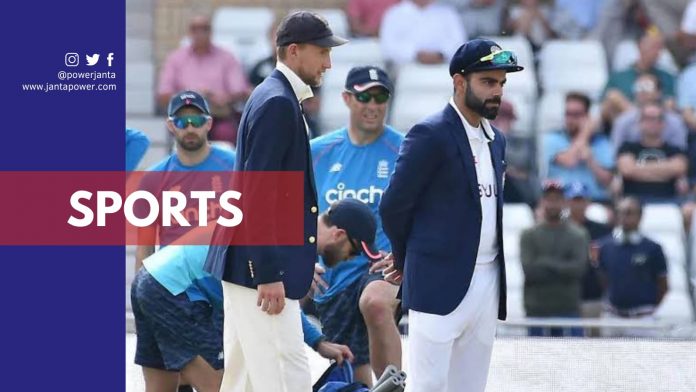 In the five-match match series between India and England, the men in blue were leading with 2-1. After the first match which was washed out by rain, Virat Kohli and Co. managed to put pressure on England and won the 2nd and 4th Test matches. The team was this close to snatching an away victory if they either won or drawn the match. However, it seems like misfortune is not giving up on India. The 5th Test between India and England has been canceled due to COVID-19.

There’s still no word on how long the match will be on hold or even it will be played or not. The match was reportedly called off after the three members of the Indian camp were tested positive for COVID-19. Therefore, after hours of contemplation, England Cricket Board (ECB) reached the conclusion to cancel the 5th Test. However, another major concern has emerged as some sources tend to indicate that delaying of fifth test match would have put IPL phase 2 at risk as well.

Surprisingly, among the 3 positive members of the staff, coach Ravi Shastri was one of them. Apart from him, Bharat Arun, the bowling coach of the Indian team, and the fielding coach R Sridhar were also get affected by the virus. Later, the assistant physio of the Indian team, Yogesh Parmar was also found as COVID-19 positive. ECB said in a press conference, “India is regrettably unable to field because of the fear of increasing the cases of COVID 19 inside the camp”.

But at this point in time, everyone has a common question in their mind that who is responsible for this? Who is at fault? Shastri and other staff and players who were not careful enough? Or the lack of proper restriction and guidelines by the ECB.

This is not the first time that negligence in COVID protocols has led to such a mishap. Similar things had also taken place in the past. However, the teams along with the cricket boards seem to be unable to learn the lesson. As a result, cricket is suffering.

The trend of negligence started during the second T20 match between India and Sri Lanka in Colombo. The first one to start it was Kurnal Pandya who was found COVID-positive along with 8 others from the team. Why? Same! Breaking COVID-19 protocols. They all were sent into 7 days of isolation and were not able to travel back with the team.

Another incident happened after the WTC final and before the beginning of the series between India and England. Rishabh Pant got positive right before the series started and he was unable to travel to Durham with the rest of the team. Why did that happen? Well, the young wicket-keeper batsman thought that it was totally worth it to watch England’s round of 16 clashes against Germany at Wembley Stadium. His carelessness could have led to a serious blow for India as Pant is one of the most crucial players for India.

It is not only the story of cricket. NBA basketball season in the United States was also suspended after Utah Jazz Centre Rudy Gobert tested positive from COVID-19. So, you see. People – not normal individuals – even professional players have grown this much ignorant.

WHAT ARE THE REASONS THIS TIME?

There is a famous saying that precaution is better than cure, but this time Indian cricket team and ECB has not taken that very seriously. That’s why maybe every team member was busy mingling with their fans and public without any worries in the world.

On top of that, the coach of Indian cricket was engaged in his book launch event probably thinking about the sales and fans. Such great examples were set by the people who were actually in charge to keep the team in line. However, it will be wrong to put all the blame on the players’ heads. The England Cricket Board (ECB) didn’t consider it to be necessary to make any strict COVID rules or regulations to keep the players and staff away from harm’s way.

WHO IS IN THE LOSS? BCCI, BROADCASTERS, OR SPONSORS

According to a recent report, ECB is in loss of around INR 200 crore. In fact, everyone is at a loss here. From broadcasters, BCCI to even the Sponsors and the Indian team. They had all the chances in the world in front of them to win the test series at England’s home ground. It was the biggest opportunity for India to rewrite history and win a test series. It all depended on the 5th Test between India and England.

At last, we can only hope that BCCI and ECB will work something out. Here, everyone was at fault. From the team to staff from the cricket boards – everyone was responsible for this. None of them had taken the virus and the severity of it seriously. Most of all, they didn’t care about the feelings of the fans. The fans who follow them, admire them, cheer for them from the bottom of their heart. It was the betrayal of that love. When the role models are being this careless about such serious matters, how would common men be blamed for doing the same?