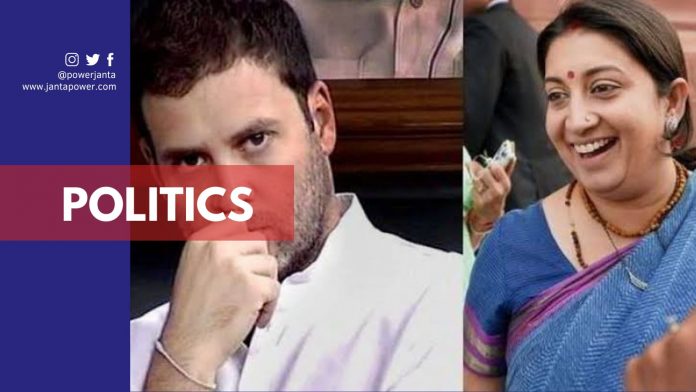 Union minister Smriti Irani slammed Congress leader Rahul Gandhi for his remark that the Modi government is trying to monetize and use key public assets for their own party profit. Smriti further added a remark that “This man’s politics begins with hypocrisy”. The coalition government in Maharashtra whose key component member is congress had earlier monetized 8000 crores, countering this,  Irani said whether the congress themselves have sold the asset.

Smriti Irani was just bashing the congress party and their party president, Sonia Gandhi by saying that they have already enslaved the nation under their family rule so there is a need to accuse the government under Narendra Modi over the charges of enslavement.

Rahul Gandhi earlier had commented that the Bhartiya Janta Party is playing the kind of politics which is breaking the country from within, speaking about that, Smriti Irani referred to the controversial statements that were made on Pakistan and Kashmir by a few advisors of the Punjab Congress and president Navjot Singh Sidhu.

Rahul Gandhi had earlier mocked the government over the rise of the covid cases and the present government’s inability to curb that situation. To this Smriti Irani said that Rahul Gandhi did not even provide aid to his 15-year-old home constituency, Amethi.

Smriti further said that Amethi did not have the necessary testing tools and medicines that were used to cure covid. The brawl between Smriti Irani and Rahul Gandhi literally became the talk of the town.