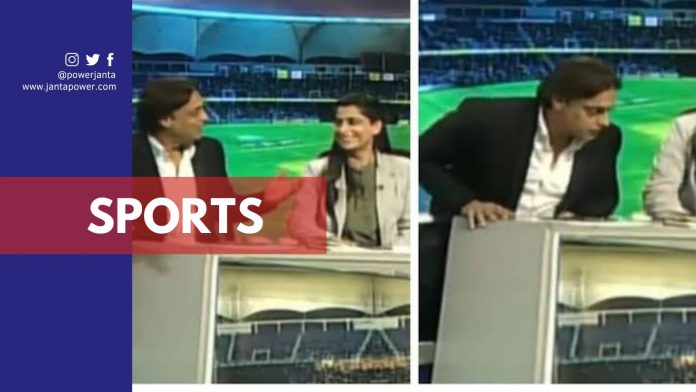 It sure is a fascinating week for the Pakistanis. Controversy, fame, and everything in between. And now, it’s time for the former Pakistan bowler Shoaib Akhtar who became engaged in a scandal after walking out of a TV broadcast and resigning from his position as a cricket pundit after being requested to leave the set by the show’s host on state-owned PTV. On the post-match program following Pakistan’s five-wicket win over New Zealand in the present T20 World Cup on Tuesday, Akhtar, 46, said he was treated poorly and humiliated by the host.

Akhtar, who has played 46 Tests and 163 ODIs, stood up, removed his microphone, and walked away. Nauman Niaz, the show’s host, made no move to call him back and exhibited no response at all, continuing with the broadcast as usual.

Other guests on the show, however, include legends such as Sir Vivian Richards, David Gower, Rashid Latif, Umar Gul, Rashid Latif, Aaqib Javed, and Pakistan women’s team captain Sana Mir, were plainly shocked by the occurrence.

Akhtar’s walkout sparked outrage on social media, with the majority of netizens sympathizing with him and demanding an apology from PTV sports anchor Niaz, a well-known cricket historian and expert who heads the PTV sports department.

Clips of Akhtar’s altercation with the presenter, which resulted in his departure, were extensively circulated on social media. On Wednesday, Akhtar resorted to Twitter to clarify his views. “Multiple clips are circulating on social media so I thought I shud clarify.dr noman was abnoxious and rude wen he asked me to leave the show,it was embarrassing specially wen u have legends like sir Vivian Richards and David gower sitting on the set with some of my contemporaries,” Akhtar tweeted.

The issue appears to have started when Akhtar ignored the host’s line of inquiry and instead to chat about pacer Haris Rauf, lavishing praise on the Pakistan Super League side Lahore Qalanders and its coach Aaqib for identifying Haris and properly nurturing him.

“This is the guy who deserves all the credit. It was Lahore Qalanders who gave us Haris Rauf,” Akhtar remarked pointing to the former Test bowler, as Noman attempted to cut him off.

The presenter, clearly agitated and disgusted with Akhtar’s attempts to undermine him, informed Shoaib that he had been misbehaving with him and that he would not accept it, and that in such situations, he should leave the show and go for a commercial break.

“You have misbehaved with me and I am telling you you can leave the show now,” the host said. When the program restarted after the break, there was further drama when Akhtar stated that he wanted to end the uncomfortable episode but sought an apology from the presenter, who refused to budge and began discussing the match.

After apologizing to his colleagues’ experts on the broadcast, Akhtar announced his resignation from PTV Sports a few minutes later. “My apologies for this but I am resigning immediately from PTV sports as I have been insulted and treated badly on live television in front of the nation,” he added.