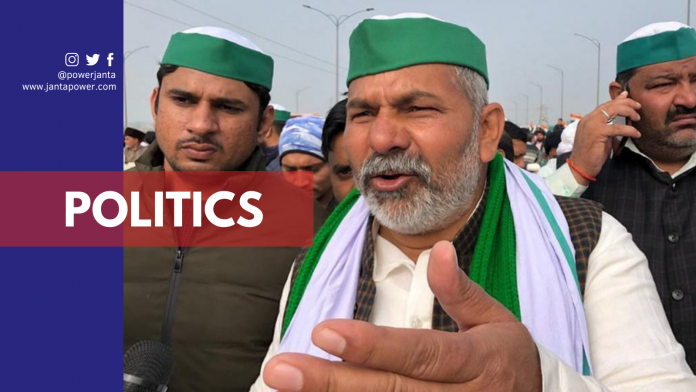 The Uttar Pradesh government moved quickly to manage the impact from the Lakhimpur Kheri incident, ensuring that protesting farmers climbed down from their vantage point within 24 hours and a mob of over 25,000 get dispersed from the place. Rakesh Tikait- farmer leader and a group of senior officials who have interacted with him over the years were instrumental in this.

As per some reports, these officers contacted Tikait and ensured that he arrived at Lakhimpur Kheri as soon as possible, setting up meetings at 1.30 a.m. on Monday that lasted till 2 p.m. These reports also claimed that Tikait had urged the officers to keep Opposition politicians away to avoid complicating the issue. Following this, the Yogi government made every effort to prevent opposition figures from reaching Lakhimpur Kheri by road or air.

According to officers, meetings with the farmers were held in three phases. The farmers made three demands: a murder case against Union minister Ajay Mishra and his son Ashish, Rs 1 crore in compensation for the families of the slain farmers, and a government job for one member of their family in their native district. Government authorities asked the farmers to cut their payout and give up their demand for government jobs, but they refused. Following the conversations, an FIR was filed, a reduced compensation amount of Rs 45 lakh was offered to each family, and government employment was announced for the relatives.

In a joint press conference with the UP government on Monday, all these demands were accepted by Tikait on behalf of the families of murdered farmers. However, on Tuesday the deal appeared to be broken when all four families refused to cremate the dead bodies. The families demanded that the minister’s son be detained first and that all bodies be re-autopsied because no bullet wounds were visible in the initial autopsies.

However, Tikait intervenes once again. During the day, he visited all four families and spoke with them again. Due to this, three of the families consented to have the cremation in the evening, which was a huge relief to the government.

The fourth family of Gurvinder Singh was not on board, but because of Tikait’s involvement, they have been assured that a team of doctors from PGI will travel to Bahraich to conduct a second autopsy. Singh’s family believes that he was shot. On the other hand, two of the farmer families received cheques from the government of Rs 45 lakh each on Tuesday evening.

For the past ten months, Rakesh Tikait has been the most outspoken critic of the BJP government. Hence, his emergence as a “trouble-shooter” for the BJP government in Uttar Pradesh’s Lakhimpur came as a surprise and shock for many, especially for the opposition.

One of the opposition leaders said, “The role played by Tikait is very strange. He was the only one allowed entry into Lakhimpur by the UP government. It was very surprising that the families agreed to Rs 45 lakh compensation and gave permission for a post-mortem without pressing upon for the arrest of the Union minister’s son who has in fact not been arrested even till now. Our conversations with the families show they just listened to Tikait.” He has been also accused of taking “blood money” by certain supporters of the farmers’ movement, including Khalsa Aid founder Ravi Singh.

However, Tikait was strong in his criticism of the minister, claiming that he and his son must face severe punishment. He also stated that once the four farmers’ grieving period is complete, farmers will begin their next protest plan.