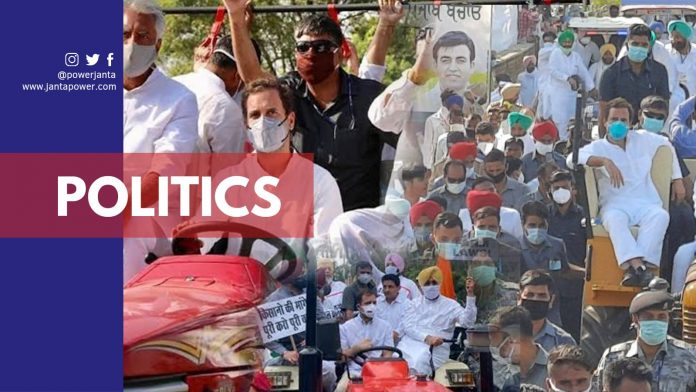 Farmers are happy with the govt, and people (protesting farmers) sitting outside are terrorists. In reality, farmers’ rights are ending, according to Rahul Gandhi. The Congress leader and other party MPs drove a tractor to Parliament on Monday and demand that the three contentious new farm laws repeals.

Mr. Gandhi joined by party MPs Pratap Singh Bajwa, Ravneet Singh Bittu, and Deepinder Singh Hooda carried banners and shouted slogans while protesting against the farm law. The Congress leaders drove a tractor to parliament to show their support for the farmers.

“These laws benefit only two or three industrialists. The country is alert to what these laws act. These laws are not within the best interests of farmers, and they should be repealed,” Mr. Gandhi, told reporters.

Since July 22, an umbrella body of farmer unions has been protesting at Jantar Mantar. The Farmers Produce Trade and Commerce (Promotion and Facilitation) Act, 2020, Farmers (Empowerment and Protection) Agreement of Price Assurance and Farm Services Act, 2020 and the Essential Commodities (Amendment) Act 2020 was passed by Parliament in September of 2020.

The farmer groups claim that these new farm laws will end the mandi and MSP procurement systems, leaving farmers at the mercy of large corporations. However, the central government has repeatedly refuted this allegation

“I deliver the farmer’s message to Parliament. They (the government) are muzzling farmer voices and preventing a debate in Parliament. These new farm laws will not rebel. The whole country is aware that these laws benefit only some huge businessmen,” the 51-year-old leader said at press agency ANI.

Gandhi also joined the Congress MPs who were protesting the alleged use of Pegasus spyware to spy on opposition leaders. MPs from the SAD, AAP, and BSP were also holding placards demanding that farm laws repeal.

Speaker Birla then began question hour, during which the ministers answered questions until 11:25 a.m. The speaker asks the MPs to return to their seats before adjourning the proceedings until 2 p.m. Return to your seats if you would like a response from the government. You are yelling slogans and expecting a response from the government, he said.

Meanwhile, Rajya Sabha proceedings were adjourned for nearly an hour as opposition parties continued their protests over an ample amount of issues, including snoop gate and new farm laws. MPs from the Congress, Trinamool Congress (TMC), and other opposition parties rushed into the House well, yelling anti-government slogans. Members prevent from raising problems with public importance, in step with Chairman M Venkaiah Naidu. “We are getting more helpless by the day,” he said before adjourning the meeting until noon.