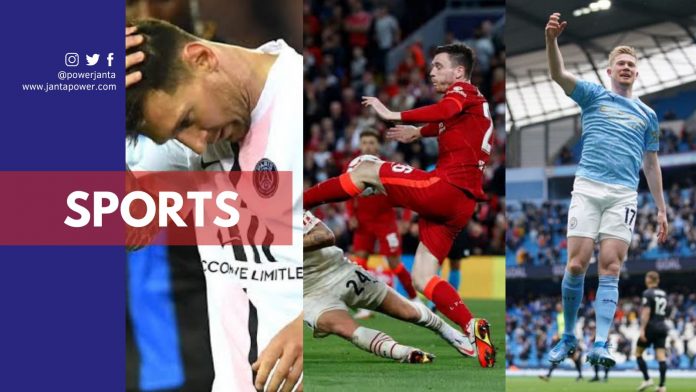 On the second day of the Champions League on Wednesday, Lionel Messi made his first appearance for Paris Saint-Germain. It was a much-anticipated debut like Cristiano Ronaldo’s for Manchester United against Young Boys. However, the night wasn’t on the Argentinian’s side as the match resulted in a disappointing 1-1 draw against Club Brugge. Despite having Lionel Messi, Kylian Mbapp, and Neymar in a near-perfect attack for PSG, the team was unable to win the match.

Meanwhile, the English giants, Manchester City, and Liverpool gave absolutely mind-blowing performances that resulted in high-scoring thrillers and their victory. After the first round of group stage matches, Real Madrid, the record 13-time European champions, overcame Inter Milan late at the San Siro in a section topped by Moldovan debutants Sheriff Tiraspol.

The Argentine star Messi failed to impress in his debut match for the French team and was far from his best. The attacking trio of PSG couldn’t provide any sparkle to the game. Instead, it was low-key Ander Herrera who scored the goal for PSG on 15 minutes of the match. He headed in Mbappe’s cross to score the goal, but Brugge quickly leveled through Hans Vanaken.

Despite Messi hitting the crossbar with a first-half shot, he was later issued a yellow card for a foul, and Mbappe was forced to leave due to an injured left ankle. Overall, all the star players were ineffective last night.

PSG coach Mauricio Pochettino speaking about his all-star attack said, “We need time for them to get to know each other. We have to improve and find the right balance, I said that before, but we must stay calm.” Talking about Messi, he further said “I’m happy with how Messi played, his desire and his attitude, and the way he’s adjusting.”

Manchester City’s wild 6-3 win over Leipzig, whose forward Christopher Nkunku scored a hat trick in vain in the initial encounter of Group A, marked Jack Grealish’s Champions League debut with an assist and a goal. From a corner, Nathan Ake headed City ahead, then Nordi Mukiele’s own goal increased their lead, but Nkunku nodded Leipzig back into the game.

Before halftime, Riyad Mahrez added a third goal with a penalty, only for Nkunku to score again early in the second half. Grealish scored City’s fourth goal, and Nkunku completed his hat trick before goals from Joao Cancelo and Gabriel Jesus sealed City’s triumph.

After former City player Angelino was sent out for a second booking, Leipzig finished with ten men. Grealish speaking to BT Sport said “I loved it. I’ve been waiting a while. The past few weeks, I couldn’t wait for this game. It’s a great night. It was one of those games. It had absolutely everything.”

In Group B, Liverpool captain Jordan Henderson scored the winning goal of the match as Jurgen Klopp’s team rallied from behind to upset Milan 3-2 at Anfield. Trent Alexander- Arnold’s strike was deflected inadvertently by Fikayo Tomori to put Liverpool ahead, but Mohamed Salah’s penalty was saved by Milan goalkeeper Mike Maignan.

With Ante Rebic and Brahim Diaz scoring twice in as many minutes before the break, the momentum changed significantly in Milan’s favor. Salah made amends in the 49th minute with an equalizer, before Henderson scored on the half-volley from the edge of the box.

It is a tough group. That is why it is important we won this game. It does not decide anything but it gave us a winning start,” Klopp told BT Sport.

Summary of other Group matches

In the other Group B match, Atletico Madrid drew 0-0 at home against Porto, who were upset by a decision to rule out Mehdi Taremi’s late goal. While, Rodrygo grabbed victory for Real Madrid with a last-minute flick in Milan, surprising Inter, who had controlled the game for much of it and pushed Thibaut Courtois into numerous saves.

In another match, Sheriff defeated Shakhtar Donetsk 2-0, with Mali international Adama Traore and Guinean attacker Momo Yansane scoring the goals. Sheriff, from a small pro-Russian separatist territory in Moldova, became the first club from the former Soviet republic to qualify for the Champions League group stage.

In a 2-1 win over Turkish champions Besiktas, England midfielder Jude Bellingham scored one goal and set up Erling Haaland for Dortmund’s second. In stoppage time, Javi Montero scored a consolation goal for Besiktas.

Ajax topped Group D, all thanks to four goals from Ivorian striker Sebastien Haller in a 5-1 thrashing of Portuguese champions Sporting Lisbon. The four-time European champions scored another goal through Steven Berghuis, with Paulinho scoring a consolation goal for Libson.