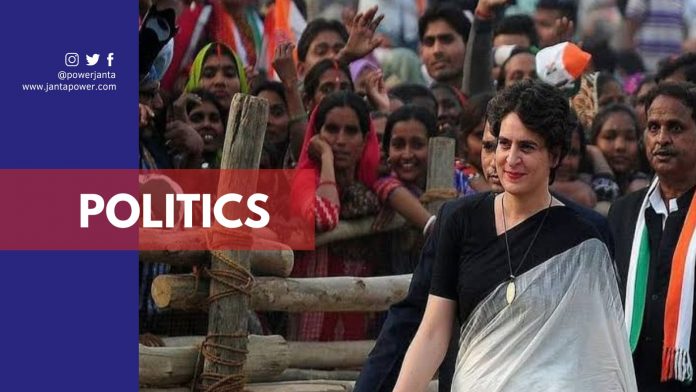 Congress general secretary and in-charge of the Congress in Uttar Pradesh, Priyanka Gandhi Vadra is all set to initiate the political battle with her master plan for UP Assembly Elections 2022. She has decided to spend most of her time in Lucknow campaigning and making election strategies against the goliath opposition, the Bhartiya Janta Party (BJP).

According to Uttar Pradesh Congress unit chief Ajay Kumar Lallu, Uttar Pradesh has witnessed a change in development under her leadership. Several reports suggest that Priyanka Gandhi Vadra’s master plan is to gear up congress in the UP election while organizing 675 camps to train Nyaya Panchayat Presidents, Ward, and Village presidents in 75 districts of Uttar Pradesh between August 5 to September 10, 2021. This training camp is mainly related to the electoral strategy, better use of social media, ideology, achievements, and history of congress against BJP on various issues like rapes, mismanagement of COVID-19, and corruption.

Priyanka Gandhi came into the limelight after raising a strong voice for the violence that happened in the Panchayat election in UP where the rest of the party merely spoke or came out on the street against violence as compared to her. She also promised to write to the State Election Commission for justice of all citizens and victims of violence by BJP in the Panchayat election. This fearless attitude and her strong motive prove that the Congress leader is more than prepared for the UP Assembly Elections 2022.

In response to rival BJP’s vote strategy “booth jeeta to sab jeeta” to get 300 seats in UP, Vadra decided to give her most of the time to UP and start campaigning in Lucknow on regular basis. Congress state unit chief Lallu also denoted Vadra as a “wind of change” by raising a slogan “badllav ki aandhi hai, jiska naam Priyanka Gandhi hai”. Has she really become the “badllav ki aandhi” that her party tends to suggest? It will all depend on whether the public accepts her as the wind of change, or she will be just another casualty in front of BJP’s saffron storm.

Vadra also cleared that the party will go solo in the UP Assembly Elections 2022. This means, there won’t be any alliance and that is a very bold yet wise move. Everyone saw what happened to CPI(M) in Bengal. This came after Akhilesh Yadav, Chief of Samajwadi Party, rejected the possibility of any pact with the Congress in UP. Yadav did not name any party but his finger was clearly pointed at Congress and Bahujan Samajwadi Party (BSP).

This is a huge decision for congress to go solo in the assembly election. Despite seeing the party’s performance in the Panchayat election where Congress was not able to win any seat out of six where it had contested. Nevertheless, there is a plus point for Congress that Vadra did not visit any of the constituencies in the Panchayat election. But now, she is a woman on a mission. Only time will tell if Priyanka Gandhi’s wind of change is enough for turning the tides of the UP Assembly Elections 2022.

ALSO, READ: UP Elections 2022: Meet The New Generation Of Leaders