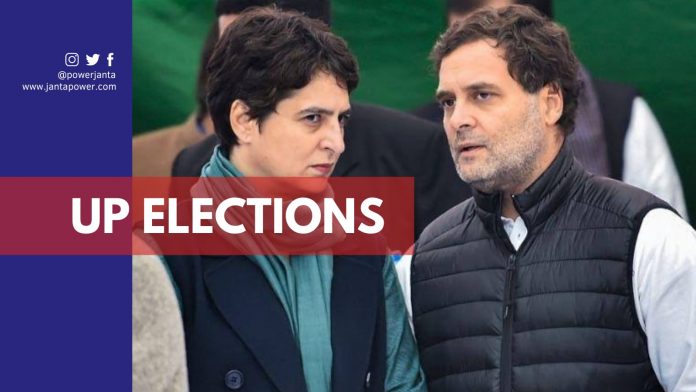 The current campaign of the Congress in Uttar Pradesh is substantially different from the previous two. Following its strong results in the 2009 Lok Sabha election, the party was confident in 2012 about its chances of resurrecting its fortunes in India’s most populous state. However, the party’s morale was at an all-time low in 2017. In both these elections, Rahul Gandhi was the face of Congress. This time Priyanka Gandhi Vadra, who is now unmistakably the party’s face in Uttar Pradesh for the UP elections 2022, has taken Rahul’s place.

Priyanka Gandhi appears to have aced the optics portion so far. The party is attempting to communicate the message that it is the dominant non-BJP force in Uttar Pradesh through Priyanka Gandhi. Her imprisonment by the UP Police, followed by her meeting with the families of the farmers killed in Lakhimpur Kheri and finally her demonstration in Varanasi, sparked a lot of interest and buzz in the media and on social media.

The party’s rank and file always supported Priyanka Gandhi. She was thought to be smarter than her brother, more politically astute, a better communicator, and more appealing to the general public. The fact that she looks like her grandmother Indira Gandhi and is a laid-back campaigner who speaks excellent Hindi are all considered pluses. However, there is disagreement in Congress about how effective Priyanka can be in UP elections.

According to some leaders in the party, her periodic visits to UP don’t address the party’s fundamental challenges. While others argue that under Priyanka Gandhi, the party’s grassroots outreach has risen dramatically, and the party is stronger on the ground than it has been in previous years when Rahul campaigned for the party.

Many believe that Priyanka Gandhi is a stronger draw for the media, and anti-BJP issues get more attention when she raises them. However, the working and campaigning pattern of Priyanka is somehow the same as Rahul. She like Rahul Gandhi is inconstant and lacks staying power. In the current campaign for UP election 2022, Priyanka is using a similar soft Hindutva model, rallies, roadshows as Rahul did in the 2017 elections and failed miserably.

In Uttar Pradesh, Priyanka’s biggest problem is to rebuild or re-establish the party’s social base. This would undoubtedly be a difficult challenge for her. Unlike the BJP, Congress failed to keep up with the shifting political terrain, leaving it useless in Uttar Pradesh. Hence, many top party leaders believe that it was a mistake to give Priyanka this task and make her accountable for a state when it becomes evident that she is unlikely to win in Uttar Pradesh.

Everyone knows that a trip, dharna, or roadshow can draw crowds, but they are unlikely to win votes. Hence, Vadra must engage with party workers and the common people regularly to establish the party’s presence in a state where a new generation of voters is uninformed of the party’s history and former supremacy in Uttar Pradesh politics. It is also suggested that she would have served the party better if she had been assigned as a prominent campaigner across the country. Her mystique would have been preserved as a result.

Priyanka Gandhi Vadra is putting all her efforts to make Congress win in the UP elections in the upcoming year. She did create a lot of buzz for her party but she needs to adopt a different model of campaigning. Following her brother’s style and model of campaigning will not benefit her and the Congress party. Hence, learning from her brother’s mistakes in the previous UP elections, she needs to modify their party’s campaign plan for the most populous state which is divided based on caste and religion. Otherwise, she will be proved worse than Rahul Gandhi for Congress.