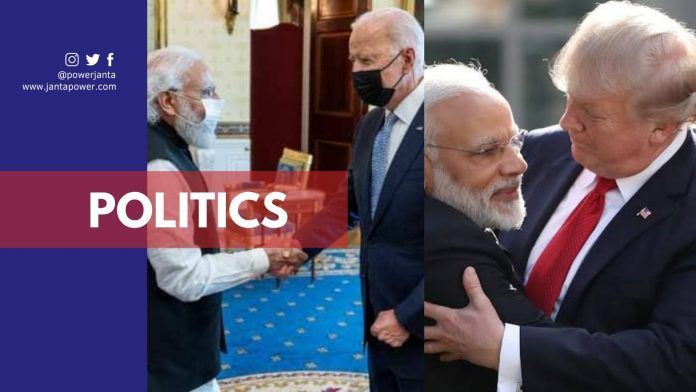 On Friday, Prime Minister Narendra Modi met with US President Joe Biden for the first time in a bilateral meeting. The meeting is the first in-person meeting between PM Narendra Modi and US President Joe Biden since the latter assumed office in January. In the opening remark of the meeting, PM Modi said that under Biden’s leadership, seeds have been sown for India-US relations to expand.

Surprisingly, PM Narendra Modi had good relations with then US President Donald Trump earlier. Under President Trump, relations between the United States and India, much to everyone’s surprise, improved. They both shared concerns about China, and there was a good affinity between Trump and Indian PM Narendra Modi. It hielded the relationship from most of the turmoil witnessed by other US allies. Probably the extremist mentality of Trump and Modi towards a certain group of people in their respective countries might be the ignition. Nonetheless, despite the gushy relations, there were several instances where Trump’s decisions were against India.

The US-India association is one of the important bilateral associations for both countries. Even when Trump was in the White House and now Biden is US president, the US-India relationship seem to only flourish with time. Is it the

Let’s have a look at the relationships of Modi with Trump and Biden.

Former US President Donald Trump and Indian Prime Minister Narendra Modi’s relationship blossomed the bilateral ties between both countries. From the “Howdy Modi” program in the US to “Namaste Trump” in India, these events showed the bromance between both world leaders. India and the US came together on issues like China’s Belt and Road Initiative (BRI), Pakistani-based terrorism, the Free and Open Indo-Pacific, and the Quad. Trump called Modi a true friend. Trump hasn’t raised any question on Modi’s decision on the Citizenship Amendment Act (CAA), Article 370, and the arrest of leaders and telecom ban in Kashmir. However, there were several decisions and tweets by Trump that caused a rift between both country’s relationship.

Mr. Trump gave a number of blows to India’s expectations from the US, including a decision on visa restrictions, calling India the “tariff king,” and slamming India and China on trade, and receiving an unfair advantage on climate change, among other things. Trump administration even removed India from The Generalized System of Preferences (GSP) list. Trump calling Indian air “filthy” on Twitter was another instance that was not a sign of good relations. Trump and Modi’s relationship was a roller coaster ride. Though there were more ups than downs, there is more expectation from the Biden government.

The US-India relationship is being spurred by a broad convergence of interests—economic, political, Defence, and strategic—under the current Biden government. During the first bilateral meeting between PM Modi and US President Biden, the US- India ties are going to be stronger, closer, and tighter. PM Modi said during the meeting that the US- India partnership is about a shared responsibility to maintain democratic values and joint commitment towards diversity.

Biden government supported India during a pandemic and even and announced to donate millions of vaccines to India under the COVAX initiative. The Indian government is said to have most engagements and virtual talks with the United States within the first six months of the newly elected US administration. Both countries are looking to work together on climate changes, covid-19, and ensuring stability in the Indo-Pacific regions.

It seems that Biden- Modi meetings, talks, and relationships will help India to make its bond stronger with the US in the future. However, PM Narendra Modi and his support and campaign for Trump during the US Presidential election last year can create complications and hurdles. After all, everyone remembers Modi’s hard campaign chanting “Abki Baar, Trump Sarkar” in Washington DC. Joe Biden is just not the type of individual to forget that. What do you think?