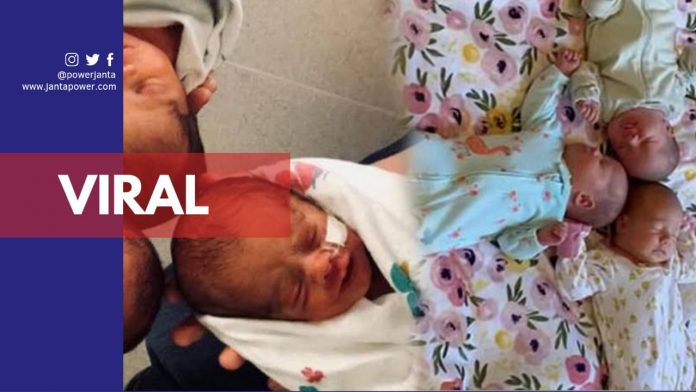 On July 8, a couple from New Jersey gave birth to a set of rare identical triplets in a Pennsylvania hospital who went viral on social media. According to experts, the three girls are healthy and are one in a million births. A team of 30 medical professionals delivered the triplets on the 34th week and the world felt their presence as the three triplets sisters went viral on social media.

Previously, the doctors informed the parents that they were dealing with an unusual situation. The Hospital in Philadelphia stepped in and offered to provide delivery care. The girls were born healthy and each of them weighs more than 2.2 kilograms. Anastasia, Olivia, and Nadia are the names of the identical triplets. Now, they’ve returned home to their two older sisters, Isabella and Sofia.

Mark Bodrog and Gabriela Mosquera of Gloucester Township welcomed their cute babies who are already social media sensations. However, the couple never expected to have identical triplet girls. Identical triplets are very very rare. It’s a one in a million case after all. According to Bodrog, there are few case studies on them. “They’re from the same egg, sharing the same placenta with three separate amniotic sacs. It’s so rare. There are hardly any case studies on it,” the doctor added.

How Identical Triplets or Twins Are Born?

When a single egg fertilizes and then splits, identical twins or triplets are born as result. These divided embryos are all the same. Children who are comparable multiples will have the same appearance and gender. Fraternal multiples form when separate eggs fertilize by different sperm.

If you have identical triplets or more, your babies could be all identical, all fraternal, or a mix of the two. This can occur if your body produces many eggs and more than one of them fertilizes.