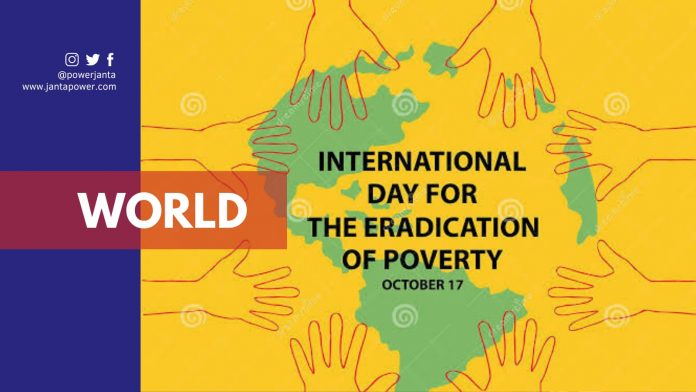 Every year on October 17, the International Day for the Eradication of Poverty is commemorated around the world. It is a day to recognize global poverty, starvation, violence, and fear, as well as to develop solutions to alleviate them. This day is celebrated globally to raise awareness about the situation of those living in poverty. In a world where people live in poverty, without a home, clean water, healthy food, and medical attention, it’s difficult to visualize overall human development.

History of International Day for the Eradication of Poverty

The first commemoration of the event took place in 1987 in Paris, France, in the Trocadéro’s Human Rights and Liberties Plaza to honor victims of poverty, starvation, violence. Joseph Wresinski, the founder of the International Movement ATD Fourth World, unveiled the commemorative stone.

The United Nations General Assembly (UNGA) then declared October 17 to be the International Day for the Eradication of Poverty in December 1992. Since then, on October 17, all countries, organizations, and citizens are encouraged to promote the day and participate in various activities aimed at eradicating poverty and hunger.

Importance of International Day for the Eradication of Poverty

This day is observed to promote awareness and highlight the challenges encountered by poor people or families, as well as to work towards the global eradication of poverty in all of its forms.

As per the World Bank, poverty is defined as earning less than $1.90 per day. We also can’t overlook the fact that poverty is much more than just a lack of funds. People are deprived of basic requirements and are subjected to hazardous living conditions, hazardous working conditions, unequal access to justice, a lack of political influence, and limited access to health care.

Poverty is also a goal of the 2030 Agenda for Sustainable Development. The first goal is to eradicate poverty in all of its forms and locations and International day for the eradication of poverty helps towards achieving this goal.

Although the world is enjoying unparalleled levels of economic prosperity and technical innovation, millions of people living in terrible poverty is a moral disgrace. Poor people have to face double trouble as they are not only outside the scope of economic progress, but they also face a variety of deprivations that prohibit them from recognizing their ambitions and prolong their misery.

Poverty is a violation of human rights, and people from all over the world must join forces to ensure that these rights are upheld. We all need to work together on International Day for the eradication of poverty as it is difficult to imagine human development without achieving a world free of poverty.

ALSO, READ: International Literacy Day 2021: Everything You Need To Know