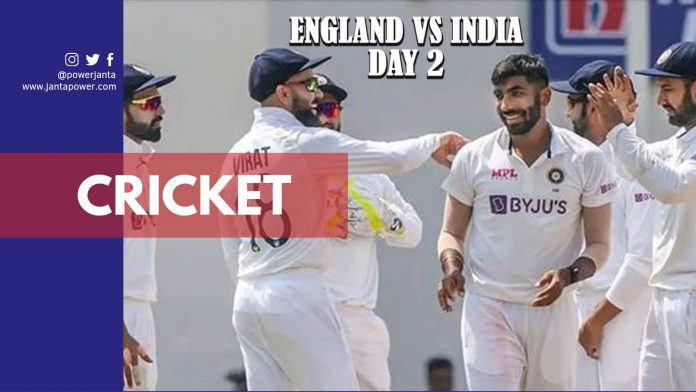 Both the India openers KL Rahul and Rohit Sharma remained unbeaten at the end of Day 1 of the 1st Test between India and England. Indian pacers put on a brilliant show and bowled out England for just 183 runs. Jasprit Bumrah was the star of the innings as he took out 4 while Mohammed Shami returned to the pavilion with 3/28. At stumps, India was 21/0 while Rahul and Rohit, both were beaten on 9 each.

Joe Root won the toss and decided to bat first. However, Jasprit Bumrah’s early strike came as a huge blow as the English side was reduced to 0/1 inside the 1st over. Dominic Sibley (18) and Jonny Bairstow (29) started to slowly build up the game but both were dismissed in the second session as England was 138/4. At the tea break on Day 1, Root (52 ) was unbeaten at the crease. Mohammed Shami was the one to remove Sibley and Bairstow in the second session.

Resuming the final session at 138/4, England lost the wicket of Dan Lawrence (0) in the very first over as he gave his wicket away to Mohammed Shami. Jos Buttler (0) was unable to get off the mark and he was sent back to the pavilion by Jasprit Bumrah and England was left reeling at 145/6.

Joe Root (64), Ollie Robinson (0), and Stuart Broad (4) went down in quick succession as England was reduced to 160/9 in the 60th over. Sam Curran showed his class and remained unbeaten on 27. However, England’s innings came to an end at 183 in the 66th over when Anderson was clean bowled by Bumrah!

Root and Bairstow were the only players to play with caution. They were good against the spin of Ravindra Jadeja. However, right on the cusp of tea break, Bairstow (29) was taken by surprise by a furious spell by Shami, and England was reduced to 138/4.

It was the day of the pacers and they all shined in their own way. However, it will be upon the Indian batsmen now to take on English pacers and give India a good score on the board. KL Rahul and Rohit Sharma, both are on the crease and fans expect a good partnership at the beginning of day 2!

ALSO, READ India Vs England 1st Test: The Final Frontier For The Indian Side