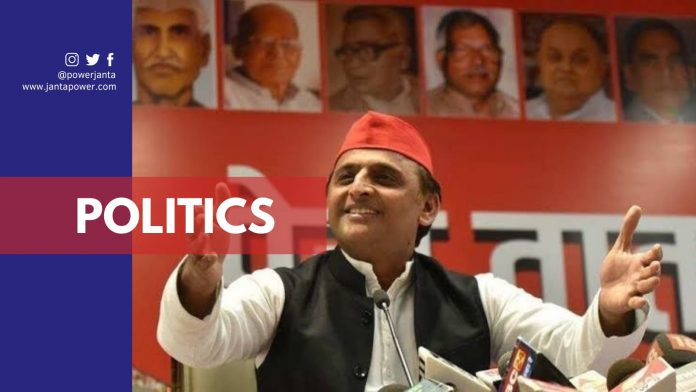 With only a few months left for the high-intensity Uttar Pradesh assembly elections, the Samajwadi Party has been building momentum not only through campaign blitzkriegs but also by forming alliances, expanding its caste support base, and undertaking outreach programs such as the ‘Vijay Rath Yatra,’ the second leg of which is scheduled for October 31. Leading the front is the party’s main man, Akhilesh Yadav.

On October 11, SP head Akhilesh Yadav began his ‘Vijay Rath Yatra’ from Kanpur and traveled across the state. “The Samajwadi Party’s onslaught is only getting started,” he told News18 in Hamirpur. Akhilesh hinted at the party’s strategy to broaden its electoral caste base and explained, “Samajwadi Party is open to alliance with smaller parties. Together, we will build a bigger unity against the BJP”.

With Akhilesh reaching out to significant names in OBC politics over the last three weeks, Om Prakash Rajbhar’s Bhagidari Sankalp Morcha has stated its intention to run in the elections under the SP banner. During the 2017 elections, Rajbhar’s backing gave the BJP a significant boost in eastern UP.

To position SP in a fresh light ahead of the 2022 elections, the party emblem has been changed from “cycle” to “bicycle,” with the official motto “22 main bicycles.” Behind this move is a desire to distance the party from its previous reputation of hooliganism and unruly workers, which was the basis for the BJP’s previous attacks on the SP.

When it was in power, the SP, which has enjoyed the most support among Yadavs and Muslims from its foundation in 1989, was frequently accused of high-handedness and domination by the two communities. Not only were skull caps absent from cut-outs and posters, but the SP leadership made certain that little emphasis was placed on topics that may supply the BJP with ammunition against the opposition.

As assembly elections approach, Akhilesh’s planned calm and low-profile strategy is being gradually supplanted with hostility and a populist campaign. Akhilesh has been keeping a careful eye on key areas of west UP, which has been at the forefront of farmers’ politics with persistent agitations against the new agricultural regulations.

The SP has also made contact with influential minority leaders. While former Muzaffarnagar MP Kadir Rana has already defected to the SP, Saharanpur heavyweight Imran Masood, despite being a Congress member, has publicly endorsed Akhilesh Yadav. SP has also set a goal of aiding young leaders in handling new problems and establishing strategies. Some of these figures are members of the legislative council, who have been staunch supporters of Akhilesh since 2012.