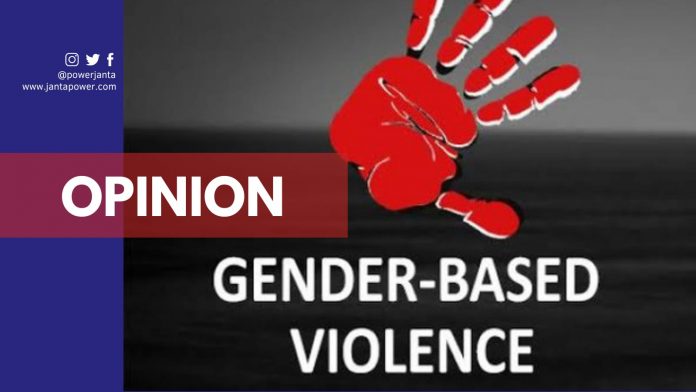 Gender based violence is a deeply engraved phenomenon in gender inequality and is a most direct form of human rights violation within all hierarchies of society. Gender based violence is a type of violence that is committed against a person because of their gender. Women and men, both experience the wrath of this cruelty but the mantle of it fall majorly on women and girls. Women and girls face a series of atrocities in their life – be it, mentally or physically.

HISTORY OF GENDER BASED VIOLENCE AGAINST WOMEN

Violence against women lays back its roots in ancient India, where men treated women as a commodity. They believed that women had no responsibilities and duties except for taking care of the house and bearing children. Women were subjected to atrocities like domestic violence and marital rape. Girls too back then had no individuality and independence. They were married off at an early age as a part of business deals between two families where many were minors.

Gender based violence against women began with primary steps of coercion over education for young girls and later on the baton was passed on to violence based on physical abuse, verbal abuse, and emotional abuse.

Even now in the 21st-century things may appear to change but it’s not the case, barbarities still exist and can take a treacherous turn if not controlled. Women and girls are subjected to frequent men gazing till the point they feel uncomfortable. It appears that in today’s time women can be a target of violence and abuse extremely easily, for example, we see recurrent cases where women and minor girls are being molested and sexually abused, this takes a demonic spin when incidents of rape or acid attacks take place.

Not only physically women nowadays go through financial abuse, where they are treated badly based on what they earn due to which women become emotionally unstable and start to question their life and individuality, but all this also happens due to the pressure from society and the male class. At times families, who are considered important, initiate violence against women for not bringing a reasonable dowry along with them at the time of the marriage.

Men are subjected to a different set of violence. The most prominent of them is that of pseudo-feminism. Yes, you read it right. A section of women aims to promote feminism in a different perception while trying to push down the male class. This toxic feminism aims to create opportunities for women by crushing the fortuity of things for men. The reason? According to these pseudo feminists, men are considered to be a noxious group of people.

A few instances of crime against women by men, may not be in favor of the male class. However, due to this, one cannot blame and treat the entire male community as damaging. Some of the instances of snatching freedom from other genders, the true ideal, and motive of feminism and feministic view has lost their materiality. Henceforth, due to these scenarios, the work of actual feminists who want to establish rights and equality among all is getting deteriorated.

The latest example of toxic feminism can be seen from the case of a Zomato delivery executive, who was allegedly blamed for harming a female customer. However, later, based on police testimonials and eyewitness accounts, it was proven that the customer accused the delivery executive falsely in a case of harassment.

Due to this, the delivery executive faced a gazillion problems including, suspension from the company and deduction of salary to absolutely nothing. Apart from this, the male class is also subjected to violence like false police arrests and encounters. One such instance can be seen in Lucknow. Here, a woman out of nowhere stopped a taxi and slapped an innocent driver almost 22 times. The police on spot didn’t do anything to stop the woman and in the end, a case was first filed against the driver and then on the lady.

Our law needs to understand who the real culprit is based on all the evidence and eyewitness testimonials. Otherwise, it can create a deeper mental impact on the minds of the male class. Incidents like these fail the motive to stop real gender based violence and can destroy the ideals of feminism also.

It must be noted that both men and women require equal rights to fight against gender based violence. It can happen to anyone at any point in time. This gender based violence can be put to rest by strong administrative measures towards crime and injustice that too equally towards men, women, and the LGBTQ community too who have face degraded comments from society. All categories of people need to be taken care of, collectively and evenly.

More awareness about the duties of the genders individually and interdependently needs to be explained. Gender issues happen because of either of the genders and it’s better off to be dealt with together in a synchronized manner. Another way to ensure violence and abuse can be prevented is by talking things out between the family and society.

A key feature that can reduce crimes and violence is by engaging the young generation in youth programs so that they become agents of change. Education has to be different. One gender must know about the struggles of the other. Sex education must be introduced. And there are tons of things like these we can do. It will ensure that they support and lend helping hand to one another in times of need and maintain overall peace and stability. All these may sound very easy but unfortunately, a world free of gender based violence still looks like a distant dream.

ALSO, READ The Dexterity Of Women In Society: What’s The Situation?