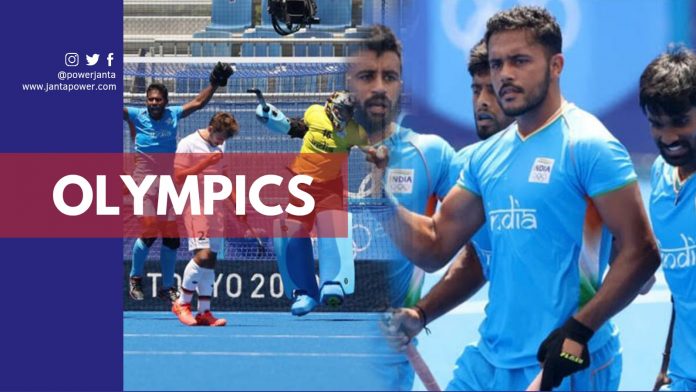 Tokyo Olympics, India vs. Germany: Indian men’s hockey team created history as the men in blue won bronze in Tokyo Olympics 2020. It is a memorable day for the fans and the team as it is the first Olympic medal in hockey secured by India since 1980. The men’s hockey team made an entire nation proud by defeating the Germans 5-4 in the race for 3rd place.

Things looked grim for the Indian side as Germany took an early lead with Timur Cruz scoring within the first two minutes. Germany adamantly tested India’s defense in the first quarter but fortunately enough, they were not able to extend their lead.

India’s Simranjeet Singh, in the second quarter, scored a well-executed goal. However, Germany came back stronger by scoring two more goals in less than two minutes. As it appeared, India was in trouble and the medal was slipping from the hands. Then, triumph came and India was awarded two penalty corners that yielded results.

Hardik Singh scored on the rebound from the first one. Harmanpreet Singh put the second one away with a superb drag-flick into the back of the nets and tied the game in a heroic way. Then, things shifted completely in India’s favor in the third quarter when Rupinder Pal Singh converted a penalty stroke. Simranjeet made no mistake, striking it into the net to extend India’s lead.

Lukas Windfeder scored on a penalty in the fourth quarter. Hence, it wasn’t enough for Germany to force a shootout. Germany got a penalty corner in the final seconds of the game. It would have been a major blow to the men in blue. However, the India goalkeeper, PR Sreejesh made a legendary save to deny the shot and made history in Tokyo. India won their first medal in hockey since 1980.

By defeating New Zealand 3-2 in their first group game, India went on to beat Germany (2-0), Spain (3-1), Argentina (3-1), and Japan (5-3) in the next games. However, they faced a devastating blow in the hands of Australia losing 7-1, and a 5-2 semifinal loss to World Champions Belgium.

After the game, Manpreet Singh dedicated his medal win to the frontline workers of India. This will be considered a success for the Indian men’s hockey team as they created history at the Tokyo Olympics campaign after almost 40 years!