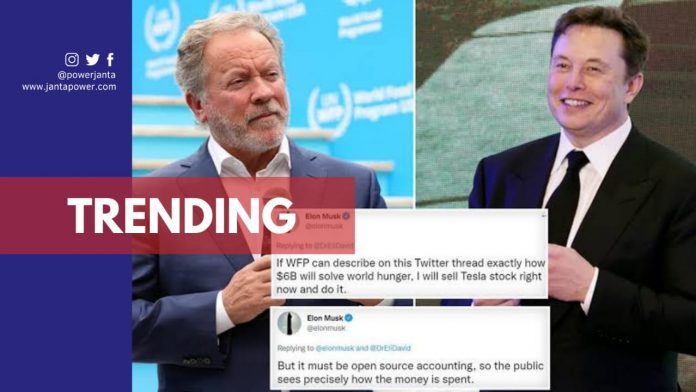 Elon Musk, the world’s richest man, has stated that he is prepared to sell his Tesla shares in order to spend $6 billion on eradicating world hunger. However, there is a catch. His comments come in as a reaction to a tweet by David Beasley, head of the United Nations World Food Programme (WFP) which turned into a battle of ego.

Beasley referenced Musk’s net wealth increasing by $36 billion when Hertz purchased 100,000 Teslas in his tweet. He went on to say that one-sixth of this sum, or $6 billion, might help save 42 million people from starvation. Following this, Elon tweeted ‘exactly how the $6 billion will help solve world hunger. He also stated that he will sell Tesla stock immediately to fund the $6 billion.

In another tweet, Musk added, “But it must be open source accounting, so the public sees precisely how the money is spent.” However, when questioned by researcher Dr. Eli David, Beasley stated that $6 billion will not cure world hunger but will “avoid geopolitical instability, mass migration, and rescue 42 million people on the verge of famine.”

He went on to say that it is “an unprecedented disaster and a perfect storm owing to the Covid/conflict/climate crises.” David had questioned Beasley on why the World Food Programme (WFP) was unable to end world hunger after generating $8.4 billion in 2020 when all that was necessary was $6 billion. Beasley then began tweeting to Musk, telling him that WFP had a “transparent and open source accounting system in place.” Musk’s team can evaluate and collaborate with WFP to be certain about this, he noted.

“With your help, we can bring hope, build stability, and change the future. Let’s talk: It isn’t as complicated as Falcon Heavy, but too much at stake to not at least have a conversation. I can be on the next flight to you. Throw me out if you don’t like what you hear!” added Beasley.

Musk, amused by the WFP director’s explanation, responded saying, “Please publish your current & proposed spending in detail so people can see exactly where the money goes.” He even shared a link to an article alleging sexual misconduct by UN officials.

Musk has a history of speaking out on serious issues, despite being known for his eccentric actions, such as smoking marijuana on a spacecraft or giving his youngest child an unpronounceable name, or driving the value of his favorite cryptocurrency, Dogecoin, through the roof by purchasing a pet dog. However, the idea of selling stocks to help end world hunger was inspired by his brother, Kimbal Musk, who has dedicated his life to sustainable eating.

Even though he is known for his eccentric actions, such as smoking marijuana on a spacecraft or giving his youngest child an unpronounceable name, Musk has a history of speaking out about serious issues, such as sending the value of his favorite cryptocurrency, Dogecoin, through the roof by purchasing a pet dog. However, his brother, Kimbal Musk, who has dedicated his life to sustainable eating, motivated him to sell stocks to help to the eradication of world hunger.

For the time being, the challenge appears to be open on both sides. WFP’s director wants Musk to have a debate about how billionaires can tackle world hunger, while Musk wants WFP to expose its ledger to the public. The fight is surely on!