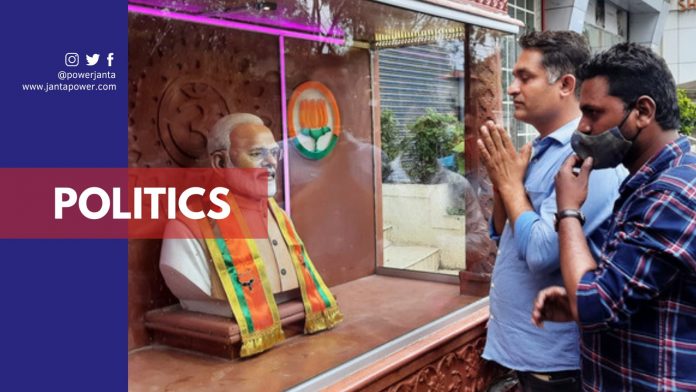 As we are all taught in our childhood that excess of anything is bad. Just like that, an excess amount of power in one’s hand is bad for the party, institution, and as well the whole nation. Bhartiya Janata Party’s (BJP) prime face and most used election weapon is none other than Prime Minister Narendra Modi who has become a dangerous asset for his own party.

Democracy starts at home. It slowly spreads in an institution, then in the party. After that, democracy reaches every mango man of the country. If the ruling BJP party has an authoritarian type of control system where they strictly follow a neck-toe control system, there’s a possibility that it would start to destroy the democratic character of the party.

In a party where the members become the puppets having lost their views, voices, and opinion – In a party, where the members are only used for the election, campaigning, and setting grounds for rallies – They are nothing more than just empty hollow shells. Their functions are simple: Obeying, singing praises, and most of the time act as memers trolling other parties on social media. The Modi government not only tries to make the independent constitutional bodies like CBI, EC, CAG, etc as cage parrots but it has also done the same to the Bharatiya Janata Party itself.

In the Atal Bihari Vajpayee regime, the lower unit of the party had the right to choose higher-level leaders in their state. They had their voices and opinion of what is right and wrong for their state. They were allowed to raise their voice regarding the need of their state and for this reason, BJP had a democratic characteristic. That is why a grounded man like Modi also thought and accomplished his dream to become PM.

The minors of the party have also enjoyed the benefits of the power in their constituency. After 2014, they had to take permission from the upper level for minor work of their own constituency.

Sometime ago Akhilesh Yadav, the chief of the Samajwadi Party said that BJP is the party of two and a half men but now it is the party of only two men first one PM Modi the prime facia and the other one Amit Shah – The strategist. Shah mainly works to make BJP’s other leaders and workers an election fighting force. He is doing his work very smartly by training all their members as vote managers. They opt for various strategies to gather votes according to the circumstances and constituency. This is a remarkable achievement. However, it is nothing less than like a parrot, who learns to speaks some words but without using their mind.

There is no space for MLAs and activists’ voices in the party. They are just used as a puppet to deliver a commanded statement related to the current issues. This top-bottom control is very dangerous for any party and we have many examples of that. The most recent one in Congress.

Hence, if the BJP prime leader is wise enough to learn from “others” mistakes, then maybe, there’s a slight possibility that BJP can become a role model for democracy. Otherwise, the way things are and how they are going, it will only remain as a party of slaves in the end as Yashwant Sinha had said.