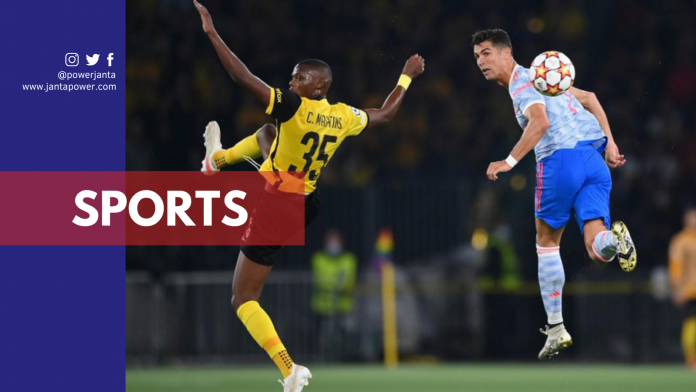 Cristiano Ronaldo’s welcome-back celebrations continued on Tuesday when he scored in his Manchester United return to Champions League. However, the party came to an end when the United were defeated 2-1 by Swiss club Young Boys in the first match of the Champions League group round at the Wankdorf Stadium in Switzerland.

It was Ronaldo’s 177th appearance in the Champions League which allowed him to equal Iker Casillas’ record. The Portuguese forward did everything in his power to make the day memorable. He just took 13 minutes to score his third goal for the club after his return from Juventus. It was Bruno Fernandes’ stunning curled an exquisite pass that allowed Ronaldo to goal calmly put through between the legs of Young Boys goalkeeper David von Ballmoos for the lead.

The early goal helped Manchester United to take a 1-0 lead in the first- half. Young Boys gradually gained control of the match and were given a lifeline in the 35th minute when Aaron Wan-Bissaka was sent off for a vicious challenge on Christopher Martins. After this, everything just went downhill.

In the second half, the home team took complete control of the game and they recorded 19 shots on goal against Manchester United who were only able to register 2 shots on goal. Miami Ngamaleu’s goal at the 66th minute helped in equalizing the score. After this, to freshen things up, Ole Gunnar Solskjaer benched Ronaldo and Fernandes in the second half. And at that moment, the game turned completely upside-down.

As a substitute for both the Portuguese stars, Ole brought in Nemanja Matic and Jesse Lingard. However, this decision was the sole reason that led to their defeat. Lingard’s sloppy backpass helped Jordan Siebatcheu to score the winner for his team at extra time shocking the entire stadium. Siebatcheu, who was on as a substitute struck in the fifth and last minute of stoppage time when the ball broke into space behind the United defense.

Solskjaer in his post-match news conference said, “In football in general, not just the Champions League, discipline is a huge part of the game. A lack of concentration, make a mistake and you get punished, you get done.” He further added, “We’ve lost the opportunity to get three points, but we’ve got two home games next and we’ve got to focus on those two.”

Twitterati reacts over the defeat of Manchester United

After Manchester United lost to Young Boys, people started reacting and sharing memes on Twitter. Many people raised questions over Solskjaer’s management. One of the Users tweeted, “Yeah, Lingard for Ronaldo was the most mind-boggling thing Solskjaer’s done for a long-time.” Other user-UtdFaithfuls tweeted, “I love Solskjaer but look at Chelsea’s defensive structure – so organized. They were a man down at Liverpool but played so well and created good chances and would’ve dominated this Young Boys team with a man down. Poor 2nd half. Poor coaching.”

People also reacted and made fun of Lingard. A user on Twitter posted “Funny how Ole Gunnar Solskjaer said he doesn’t acknowledge assists and then Jesse Lingard went and assisted Young Boys’ winning goal.” Other User tweeted, “Young Boys: “How are we supposed to beat Man Utd? They have Christiano Ronaldo. Manager: That is where Lingard comes in.”

Manchester United loss was in motion the moment Wan-Bissaka was shown the red card. And later, the defeat was made inevitable with the substitution of Cristiano Ronaldo. This loss of United was its seventh defeat in 11 Champions League matches under Solskjaer which is alarming as well as disappointing.