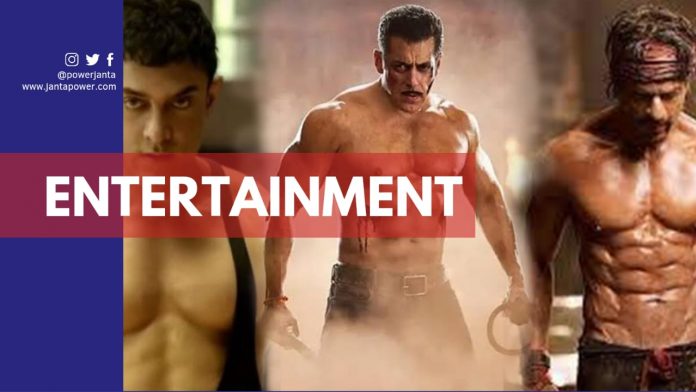 The Hindi film Industry or what we know as Bollywood has the power to influence people and change the way people look, new trends always become a fad amongst the audience. Big commercial films, especially of the three Khans can really put an effect on people’s minds to desire a chiseled physique like theirs.

Being a B Town celeb is surely not an easy task. Actors spend hours working on themselves physically in order to transform themselves according to their role in the films but sometimes actors use a rather more easy approach to look physically fit on the screen and that is possible with the use of computer-generated imagery or CGI and due to this the audience often becomes the victim that tends to fall for such unrealistic body standards.

So let’s dive into it and see 5 times Bollywood actors were caught using CGI on their bodies to fool the audience.

The bhajan of Bollywood, Salman Khan is the one who started the entire fashion of building bulked bodies. He started showing his amazing physique in the early days of Pyar Kiya Toh Darna Kya. However, now, Bhaijan is seen to have become more reliant on computer imagery to look dynamic even though he keeps posting about his training sessions, but we guess it’s not enough

Most recently Salman Khan’s most awaited film Radhe was released, in this action-packed entertainer, the actor was caught using CGI on a body shot. The scene in the film was specifically added although it was unnecessary. Salman Khan is seen using CGI widely in his films like JAI HO, EK THA TIGER, and WANTED.

Shah Rukh Khan is considered to be one of the most charming actors of all time and the director’s favorite too. In his 2014 film, Happy New Year the actor gave a few shirtless body shots but all of them came up with a twist.
Although the actor did transform himself physically, a part of CGI was used, to showcase his body in a more well-defined and chiseled way. In the song ‘Manwa Lage’, the CGI work can be clearly seen and the audience wasn’t really impressed with it. The actor also used VFX in his action-thriller FAN, where he played a double role. The technology was used to make him look younger.

Akshay Kumar is considered to be the fittest person in the entire industry. His no smoking and no alcohol rule is what has helped him look so energetic through these years. The actor really has a fit body but taking off his shirt and flexing isn’t his USP.
Even after all this, the actor in his 2013 flick Boss, was seen ripping his shirt in the climax to flaunt his bulging abs, unfortunately, it will be a shocker to many that the actor too opted for special effects imagery to make his body look fit for the role and look even more physically attractive than usual. Post this, the actor hasn’t used CGI yet but that one time too, he was caught red-handed.

The most commercially successful actor of all time, the real OG of the comedy genre, Govinda was worshipped and was considered most desirable in the 90s. Lately, when the actor wasn’t getting any out-of-the-box roles, he opted to star in the film HAPPY ENDING along with Saif Ali Khan and Ileana Dcruz. The actor too was asked to go shirtless and boast his 6 pack abs but little did we all notice that the abs were highlighted using digital graphics.

Amir khan or as we call him ‘MR PERFECTIONIST’, too took the help of graphic imagery in his highest-grossing blockbuster DANGAL. The actor was seen portraying the role of two age groups, one being of a 55-year-old man and the other of a younger Mahavir Phogat and to make him look younger, digital imagery was used just to bring a bit more perfection but it was all quite noticeable by the audience.

These looks and amazing physical transformations may seem widely amazing but the use of CGI just bluffs the audience. Hence, people tend to strive for unnecessary and unrealistic body goals. Get real! You are just fine, just the way you are!