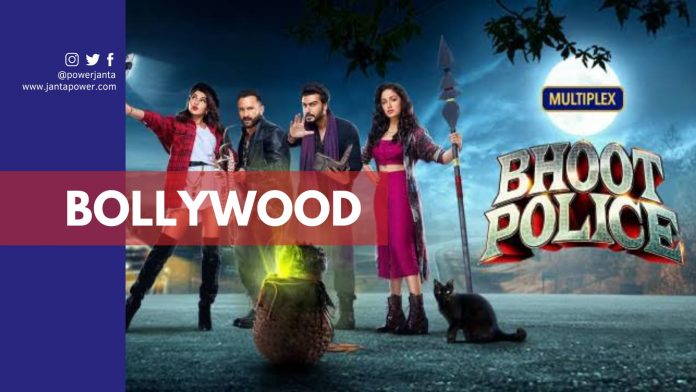 The awaited movie Bhoot Police featuring Saif Ali Khan, Arjun Kapoor, Jacqueline Fernandez, and Yami Gautam in the lead roles has leaked online. The horror-comedy recently debuted on the OTT platform Disney+ Hotstar. Helmed by Pavan Kripalani and bankrolled by Ramesh Taurani and Akshay Puri this movie is about two brothers- Vibhooti and Chiraunji, on a mission to catch ghosts. Sound interesting?

Coming to the review section, the film got some mixed responses from netizens, and it is extremely disheartening that the entire movie is already available on several notorious sites. Many have called the film an entertaining piece while the others are slamming it left, right and center.

Bhoot Police was released on the OTT platform today, September 10, 2021. The film is all about the ghost hunter brothers Chiraunji and Vibhuti and their motive to capture a demon haunting a tea estate in Himachal. If you are asking about the IMDb rating, the film then is at 7 on 10.

What The Netizens Are Talking About?

Let’s have a look at what the Twitter users are saying. A Twitter user humorously praised Saif Ali Khan for the film and also compared him with the horror-comedy with his 2014’s Humshakals. The user wrote, “If we were to compare Saif’s hamshakals with bhoot police I’d go with bhoot police.”

Coming to the post, another user compared the film with the Ajay Devgn starrer Bhuj: The Pride Of India. “#BhootPolice on #DisneyPlusHotstar If you thought Bhuj The Pride of India was directionless, script-less, tacky and the worst movie of the year, meet its strongest contender. Even the ever-dependable Saif Ali Khan hams his way through this mess. Totally avoidable!”

Again Twitter user praised the actors for their work in the film but was not so happy with the script. The user wrote, “Bhoot Police Now Streaming It was fun watching #BhootPolice. Writing would have been better but actors really pulled up the show & made this film, love to watch.” The film also saw budding romance between the characters. A fan of Saif and Jacqueline’s characters wrote, “this movie is really Amazing the chemistry between Saif and Jacqueline gonna rock …”