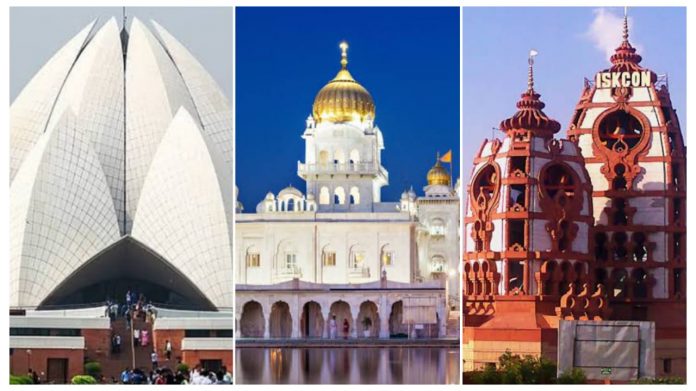 The heart and capital of India, Delhi has long been known for its rich cultural heritage. It’s a hub for its iconic built of religious and historic temples. Delhi is the most popular tourist destination. These temples of Delhi are bound to give a peaceful and serene ambiance. It can only be experienced rather than being explained. So, here we’ve put together a list of temples of Delhi which you should definitely visit if you want to experience the inner peace you’ve always looked for!

Akshardham Temple in Delhi – The Epitome of Spirituality and Culture

‘Akshardham’ means the divine abode of God. It is a well-known Hindu temple as well as a spiritual and religious place. The World’s Largest Comprehensive Hindu Temple, Akshardham, has been inscribed in the Guinness Book of World Records. The Akshardham Temple of Delhi is one of the top tourist spots, with over 234 finely carved pillars, 9 complex domes, 20 square spires, and 20,000 statues of spiritual icons of Indian heritage.

Lotus Temple – One of The Most Beautiful Temples of Delhi

This temple in Delhi was built in 1986 in an image of a lotus flower and surrounded by green-lush pastures. Furiburz Sabha, the architect, picked the lotus as the universal emblem of Hinduism, Buddhism, Jainism, and Islam. This enormous wonder can accommodate 2500 people inside it. Individuals may sing, chant, or worship in the temple to their heart’s content.

The Chhatarpur Temple, also known as Shri Aadya Katyayani Shakti Peetham, is devoted to the Goddess Katyayani. Sant Shree Nagpal Baba founded the temple in 1974; it has become a notable religious site with many devotees visiting throughout the year. Visit the temple during the Hindu festivals of Dussehra, Mahashivratri, and Janmashtami to see the religious zeal.

The ISKCON temple, previously known as Sri Radha Parthasarathi Mandir, is associated with the International Society for Krishna Consciousness (more commonly known as the Hare Krishna movement). It is devoted to Lord Krishna and Radharani, who has taken the shape of Radha Parthasarathi. Another lure is the lotus-shaped ceiling of the worship area decorated with religious paintings.

The largest and most famous Sikh temple in Delhi is Gurudwara Bangla Sahib. It is also known as the small golden temple of Delhi. The temple was once the abode of Mirza Raja Jai Singh (a monarch and leader of the Mughal army) in the 17th century, and Guru Har Krishan, the eighth Sikh guru, resided there. The temple is always open. Most notably, the temple serves more than 10,000 people for free every day. Volunteers are encouraged to assist with the cooking of the meal in the kitchen.

As the first temple in the Birla network, Shri Lakshmi Narayan Temple is also known as Birla Mandir. The majestic temple, built-in 1938 by industrialist BD Birla, is devoted to Maa Laxmi (the goddess of prosperity) and Shri Narayana (the protector), with side shrines dedicated to Lord Shiva, Shri Krishna, and Buddha. Mahatma Gandhi, the Father of the Nation, inaugurated the Birla Mandir.

Shri Kalka Ji Temple: One of The Oldest Temples of Delhi

This temple is also known as Jayanti Peetha or Manokamna Siddha Peetha; the terms manokamna and Siddha symbolize desire and accomplishment, respectively, and peetha refers to a shrine. Shri Kalkaji Mandir, one of Delhi’s oldest Hindu temples, is devoted to Goddess Kali, a manifestation of Maa Aadi Shakti. The temple is said to be around 3,000 years old.

Hanuman Mandir: One of The Five Mahabharata Temples

Hanuman Temple, situated in Connaught Place, New Delhi, India. his temple is known for a massive 108-foot-tall statue of Lord Hanuman. It is believed to be an ancient Hindu temple that is expected to be one of the five Mahabharata temples of Delhi. It is said that the Pandavas established this temple, which has an entrance named Baba Kharak Singh Marg.

The Verdict: Temples of Delhi

To explore Delhi and its numerous aspects of spirituality and religion, one should begin with the temples of Delhi. The Hindus refer to God’s divine home on Earth as “Mandir.” There are glorious temples in almost every part of the nation. Every temple has a distinct history and mythology associated with it. Visit the temples of Delhi the next time you’re in the city.

1. Which is the largest temple in Delhi?

2. Why Akshardham temple is famous?

The following are some of the reasons that play a part in the fame of Delhi’s Akshardham temple.