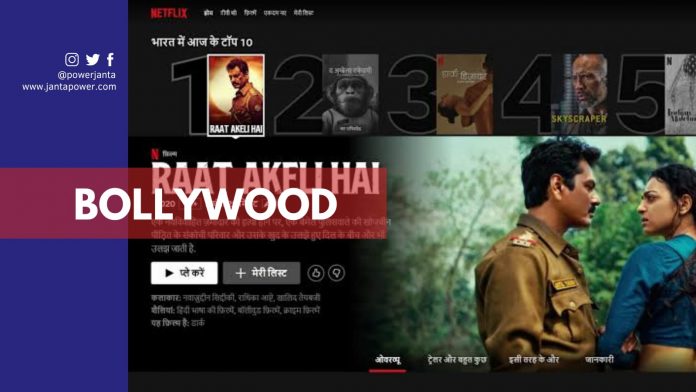 Hello September! With the beginning of the new month, here we bring you the list of 5 underrated Indian movies to watch on Netflix in September. These 5 movies have great storylines, unique plots, spectacular casts, and mind-blowing direction that you can look forward to. However, due to various reasons, these flew under the radar.

Though there are hundreds of films that can be added to this list, we have only picked the five underrated ones and that also from Bollywood. All of these movies were released in 2021 and each of these deserves at least a watch.

WHY WATCH IT? – There’s a slight possibility that Majnu and Khilauna may disappoint you. However, it’s all worth it if you watch the other two films- Geeli Pucchi and Ankahi. These two films have better writing, direction, and acting that will surely captivate your attention. With Geeli Pucchi, Neeraj puts his characters at the intersections of caste, class, sexuality, and patriarchy. Konkana Sen Sharma and Aditi Rao Hydari will make you fall in love with their acting. Neeraj has delivered yet another masterpiece just like Masaan.

On the other hand, Ankahi is also worth watching for the brilliant performance of Shefali Shah and Manav Kaul. The story revolves around an upper-middle-class homemaker ( Shefali) who is finding it difficult to maintain peace at home and hearing impaired Photographer Kabir(Manav Kaul). This is a story that will appeal to a lot of people and that’s for obvious reasons.

2. Tribhanga:  Tribhanga is one of its kind with three excellent lead actors – Kajol,  Tanvi Azmi, and Mithila Palkar. Directed by Renuka Sahane, the film is all about the friendship and bonding between female characters of three different generations. It shows motherhood in all its imperfect glory.

WHY WATCH IT? –This Netflix film challenges the pre-occupied notion of an ideal mother and gives us a story about three generations of women with several dysfunctional relationships. And all these merged into one impactful film. It’s an entertaining yet unconventional and thought-provoking film.

3. Pagglait:  Starring actors like Sanya Malhotra, Ashutosh Rana, Raghubir Yadav, you will never regret watching this movie on Netflix this September. The film story is about a young widow who is not reacting or grieving like others which makes her family and relatives think she got mad.

WHY WATCH IT? – Just watch it for the unique storyline, stellar performance of the actors especially Sanya Malhotra who get into the skin of the character and played it beautifully. A small-town story with a unique touch and twist.

4. The Girl on the train:  This Indian mystery thriller film directed by Ribhu Dasgupta and starring Parineeti Chopra and Aditi Rao Hydari is surely an underrated film to watch this month on Netflix. The story is about a divorcee who suffers a miscarriage due to a road accident and becomes an alcoholic. The acting of lead actors and direction is not that great but its story compelled me to mention it in this list.

WHY WATCH IT? – This film is based on the bestseller book with the same title by British author Paula Hawkins, so just watch it for the thriller storyline.

5. Raat Akeli Hai: Though this movie got released in 2020, but I couldn’t stop myself from recommending this to watch. Starring Nawazuddin Siddiqui, Radhika Apte, Tigmanshu Dhulia, this murder mystery on Netflix will surely turn your movie-watching experience memorable this month.

WHY WATCH IT? – Watch it for its unique story, excellent performance of Nawazuddin Siddique and Radhika Apte, and equally exceptional cinematography. Though Raat Akeli Hai is two and a half-hour long, don’t be sad. It will surely make you glued to your seat till the end and you’d wonder why isn’t it longer?

This list can be endless as there are plenty of underrated films on Netflix which I want everyone to watch at least once. But with these 5 Indian films, we hope your movie-watching experience on Netflix in September 2021 turns out to be great.