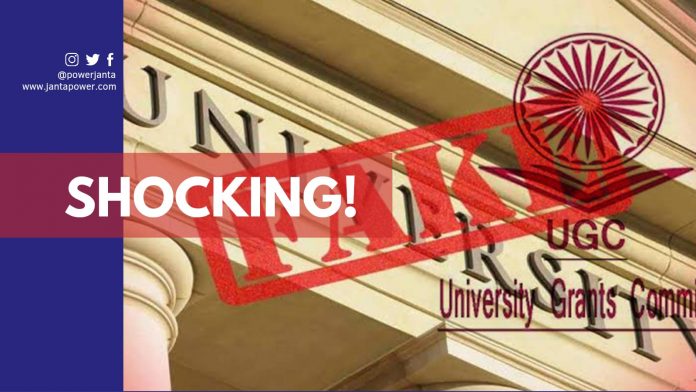 Engineering Seats At Decade’s Low, 63 Colleges To Shut Down In 2021 Union Education Minister Dharmendra Pradhan announced a list of 24 fake universities on Monday. The UGC declared 24 “self-styled” institutes to be a fraud and found to violate norms. Dharmendra Pradhan responds to written questions in the Lok Sabha about state-by-state details of non-recognized universities and what actions are taken against them.

Bhartiya Shiksha Parishad and the IIPM in Qutub Enclave also violate the Act of 1956. The website, http://www.ugc.ac.in, has state-by-state information on fake universities. Pradhan says that the University Commission is taking steps against them. He warns notices to institutes that were awarding invalid degrees in violation of the Act of 1956.

Mr. Pradhan spoke about the actions against fake or non-recognized universities. He said, “the UGC issues public notices about the list of fake universities/institutes in national Hindi and English newspapers.”

He also added that “The commission writes letters to state chief secretaries, Education secretaries, and, principal secretaries to take action against such universities located in their jurisdiction”. Further, he informed that these fake universities have received warning notices already as they are violating the UGC Act by distributing fake degrees to the students.

“Show cause and warning notices are issued to the unauthorized institutes awarding invalid degrees when any self-styled institution is found or noticed functioning in violation of the UGC Act, 1956,” Mr. Pradhar said.

ALSO, READ Engineering Seats At Decade’s Low, 63 Colleges To Shut Down In 2021