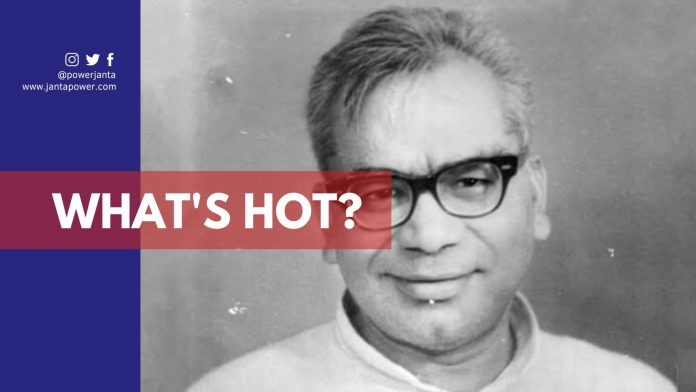 Ram Manohar Lohiya was a socialist leader as well as a political activist. Lohiya was born on March 23, 1910, whereas he died only at the age of 67, October 12, 1967. Hence this day was observed as the death anniversary of a great freedom fighter and leader. He was a prominent figure in India’s independence movement.

His whole career was devoted to social injustice and inequality. However, the nation only remembers him for his views on the caste-based reservation and his way of socialism. But in reality, before a decade from India’s independence, he talked about a modern India in a wider and modern world.

His father Hira Lal was also a patriot and freedom fighter. Therefore Lohiya has seen and got the lesson of patriotism from childhood. Lohiya completed his bachelor’s degree in 1929 from the University of Calcutta and from the University of Berlin he got his Doctorate in 1932 where he studied economics and politics.

Lohiya was actively involved in Congress Socialist Party in 1934, it is the left-wing of the Indian National Congress. He also motivates other youth to participate in the freedom movement. Beyond this, he taught them literature, poetry, art, and many other things to give them a deep understanding of the nation.

After independence, he left the Congress and joined Praja Socialist Party. Later on, Lohiya established his own Socialist party and become its chairman. Lohiya was a good orator and a passionate writer therefore, he was also an editor of its journal Mankind. Through his journal, he advocates for social reforms, social injustice, and caste and class discrimination.

Ram Manohar Lohiya plays a key role to make Hindi India’s official language. He was elected in Lok Sabha in 1963 where he criticized many government policies, he always talked about progressive views and that’s why he became inspirational for many Indians. He was a man of courage who was never afraid to go against the flow. So this is another reason we celebrate his death anniversary.

ALSO READ: Megan Ryan Gets An Emmy Award On Her 25 Year Old Birthday